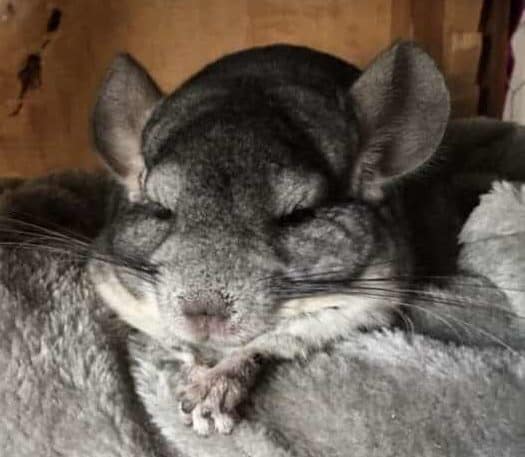 When chinchillas are awake they can be very active animals. They are able to move extremely fast and jump up to 6 foot!

Are chinchillas nocturnal? Chinchillas are crepuscular animals which means they are most active at the hours of dawn and dusk, although that doesn’t mean they cannot be active during the day or night time.

Before you go ahead and adopt a chinchilla as a pet it’s a good idea to first understand their sleeping pattern and how it varies from other animals and humans. 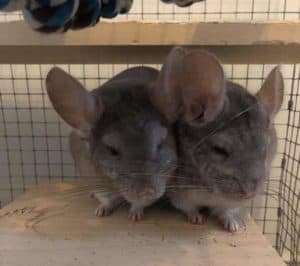 Chinchilla’s are crepuscular animals which means they are most active at dawn and dusk with periods of both sleep and wakefulness throughout the day and night.

Chinchillas tend to sleep in blocks, and will only get up to go to the toilet or eat and drink.

It’s not uncommon for chinchillas to sleep up to 12 hours at a time.

One of the reasons chinchillas are crepuscular animals is because in the wild they are regarded as prey and this sleeping schedule helps them avoid predators.

Chinchilla’s bodies also easily overheat, especially during a very hot day. Due to this, wild Chinchillas tend to sleep during hot days in dark cool spaces and are most active on cooler, darker parts of the day.

It is important to place your chinchilla cage out of direct sunlight and in a cool room so that they don’t overheat. I’ve written a list of the best chinchilla cages on the market with a pros and cons list and size measurements to make sure your cage will fit in a certain location.

The Differences Between Nocturnal, Crepuscular, and Diurnal

Nocturnal animals sleep during the day and become active at night. They are adapted to darkness, thanks to their developed eyes that allow them to see well even in low light.

Nocturnes have developed hearing and smelling abilities, making it easy for them to hunt in the dark. Excellent examples of nocturnal animals are beavers, owls, and tigers

Examples of nocturnal animals include raccoon, rabbits, skunk, coyotes and many more. Nocturnes sleep during the day, mostly in a den or burrow.

Most desert animals are nocturnes to hide from the hot daytime temperatures. Some nocturnal animals are adapted to survive in the dark.

Crepuscular animals are active at dawn and dusk.

Many people mistake crepuscular animals for nocturnes although that isn’t the case.

In the wild chinchillas are crepuscular as this sleeping pattern helps them escape predators and keeps them cool during hot sunny days.

Diurnal animals are active only during the day. Humans are diurnal.

Squirrels and songbirds are pure diurnals. They stay active during the day and sleep the entire night.

How Long Do Chinchillas Sleep For?

Most of the time chinchillas will sleep in the day, although it isn’t unheard of for chinchillas to sleep at night.

If you leave your chinchilla undisturbed it’s quite common for them to sleep up to 12 hours a day and only wake to go to the toilet or to eat and drink.

To make sure your chinchilla sleeps well it is important they have the correct bedding materials. I’ve written a list of the best 14 chinchilla beddings that are comfortable and will provide a safe, soft place for your chinchilla to sleep.

Chinchillas sleep in intervals and can spend the entire day sleeping. Occasionally, they may wake up to urinate or take some snacks.

Chinchillas tend to get less active as they age and will become more sedative and spend more time sleeping.

How Do Chinchillas Sleep?

Chinchillas tend to sleep on their feet. However, some chinchillas have unique sleeping positions.

When sleeping, chinchillas place their face forward, near their body.

They point their ears, which usually angled down with the rest of the body. Chinchillas like to sleep in this position.

Even when chinchillas sleep they remain alert and can quickly wake up if they hear noises. Chinchillas also dream. They move a lot or make baby noises when sleeping.

Sometimes chinchillas will sleep with their eyes wide open. Although the iris can close completely, hence light does not penetrate the eyes. The chinchilla may not notice your hands if you move your fingers in front of it, but it quickly wakes up when it hears noises in the cage.

Chinchillas can sleep for long hours, especially during the day. For example, once they go back to sleep at 8 am, they can sleep all the way to 6pm.

Typically, chinchillas eat and go back to sleep. If they sleep in their hammocks, they will quickly go back to the bunk after breakfast. Chinchillas can sleep throughout the day if left undisturbed, but they will wake up to drink, eat, and urinate.

They appear to rest at intervals in any given day.

Although your chinchilla may appear to be in a deep sleep they are still very alert and will respond immediately by waking up if there’s any noise.

My Chinchilla is Sleeping On Its Side – Is This Normal?

Some chinchillas like to sleep on their side and is perfectly normal.

If a chinchilla sleeps on its side, then it could be because of four things: it is pregnant, it is drained after exercise, is too hot, or it likes to sleep that way.

However, if this is new for your chinchilla it could mean it is pregnant, drained from exercise or is overheating.

Check your chinchilla’s ears and make sure they aren’t pink or red.

If you feel like they are overheating it is a good idea to give them a cold tile to lie on or try reducing the room’s temperate.

Chinchillas don’t really have a particular way of lying and each chinchilla will sleep in a different position.

Most of the time it lays on all fours, and in other circumstances, it would sleep on its side. It depends on your chinchilla’s behavior/personality.

Does My Chinchilla Need a Hammocks to Sleep in? 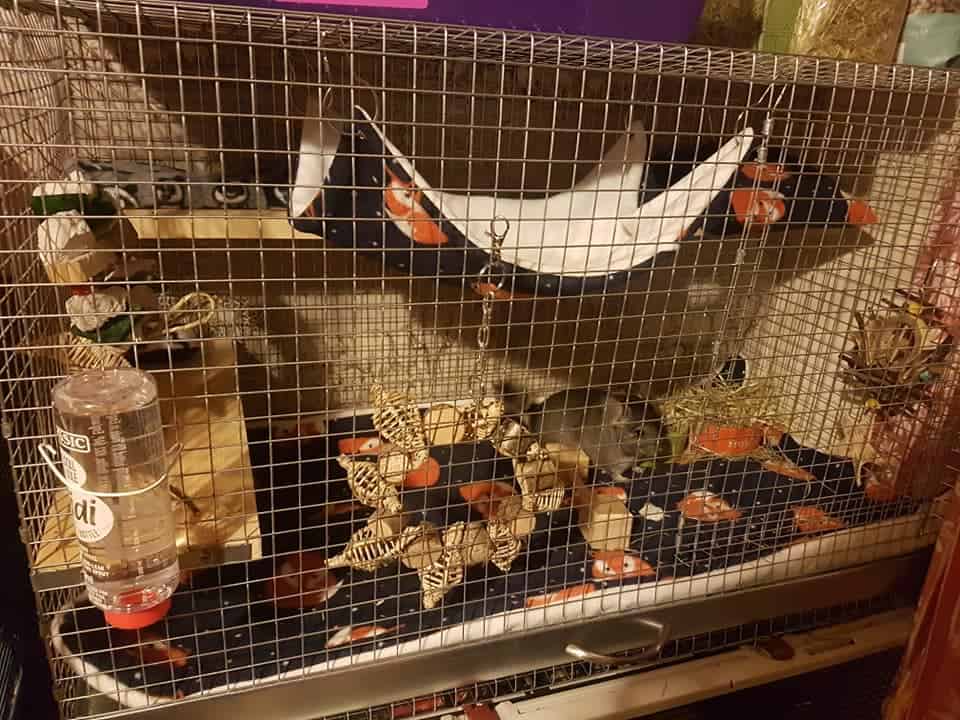 Your chinchilla doesn’t need a hammock but it might be a nice gesture and a good addition to their cage.

It is recommended to find a hammock that uses natural dyes as it isn’t uncommon for chinchillas to nibble on and eventually destroying the hammock.

You need to make sure all materials and objects that are placed in your chinchilla’s cage are safe for the chinchilla to consume or won’t hurt them.

Chinchillas also look extremely cute when sleeping in a hammock!

Can I Change My Chinchillas Sleeping Schedule?

Chinchillas are most active at dusk and dawn and it is unlikely that you will be able to change their sleeping schedule.

Trying to change their sleeping schedule can cause health problems and stress your chinchilla out which can cause them to become ill and not live as long or be as happy.

You can try changing their light schedule by having a 12 hour light that goes off and on to fit our day and night schedule. This has been known to help your chinchilla to be less awake at night.

You also shouldn’t force your chinchilla to stay awake or keep waking them up whilst they are sleeping. Due to chinchillas being prey animals they are likely to wake up when you approach the cage.

Chinchilla Requirements to Make Sure They Get Good Quality Sleep

Giving your chinchilla basic health essentials is important to make sure they get good quality sleep and remain healthy.

It is important your chinchilla gets the correct diet as it helps with their overall health and makes sure their teeth doesn’t get too long. A healthy, happy chinchilla will live much longer. I have written a complete guide on what diet you should and shouldn’t feed your chinchilla with product examples and further nutional details.

You can also use a water bowl instead of a water bottle, but bottles are the preferred ways as it is more convenient and easier to fill up and less likely to spill.

Making sure they get enough exercise is also another health essential that your chinchilla needs. Make sure they have enough toys, a large enough cage and a running wheel to keep them occupied when you’re not around.

You should let them out of their cage to run around for at least 1 hour per day. This is also a good time to bond with your chinchilla, build up trust and to give them some company.

If your chinchilla doesn’t get enough exercise in the evenings or day time it is more likely they will be awake at night and keep you awake if you sleep near them.

Sleeping near your chinchilla isn’t recommended as they will likely keep you awake as they are most active at dust and dawn.

When your chinchilla is awake they will be moving around their cage, using their toys and eating and drinking which can get quite noisy.

Why is my chinchilla sleeping so much? Chinchillas are most active at dawn and dusk and for them to sleep in the day is normal. If your chinchilla is sleeping more than normal then a visit to the vets would be a viable option.

How much sleep does my chinchilla need? If you don’t disturb your chinchilla they can get up to 12 hours of sleep per day and will only get up to urinate, eat or drink. 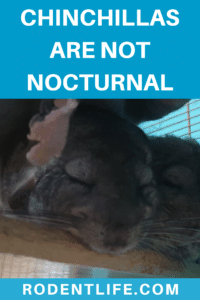 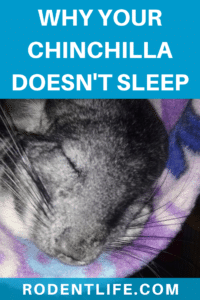 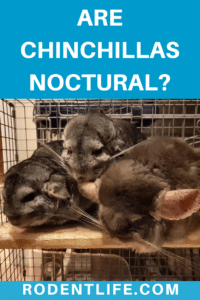