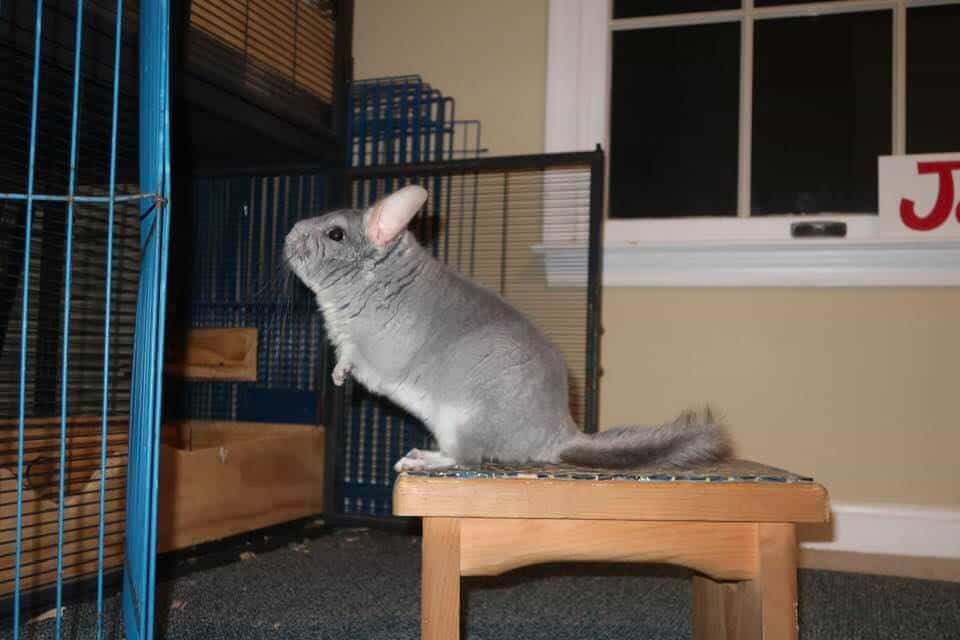 Chinchillas belong to the rodent family and just like mice and other rodents they chew, bite, and nibble.

Chinchillas may bite their cage because of their teeth. You should provide them with different types of hay such as orchard grass, alfalfa, and Timothy Hay. Hay containers fibers and roughage that helps keep their teeth the right length.

How Do I Stop My Chinchillas From Biting Their Cage? 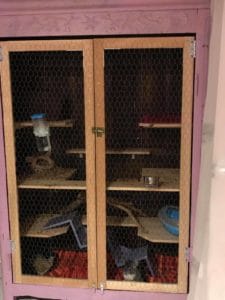 The best way to stop chinchillas from biting their cage is by ensuring they have a proper diet and toys that they can chew.

Hay cubes are good because they are easier to clean up.

Don’t buy too much hay at once because if hay is not consumed in time it becomes dusty or moldy and becomes less nutritional.

Keep the hay in a dry environment.

Don’t give your chinchillas processed pellets as the primary source of food because they don’t always have the fiber and roughage that the chinchilla requires for their teeth to grow and for them to clean their gut.

However, if you give the chinchillas pellets, make sure it is in small quantities.

There are excellent and affordable pellets on the internet, which you can purchase in bulk. Many chinchilla owners prefer Oxbow and Purina Mazuri.

Purchasing the pellets from a chinchilla rescuer is much safer because the vendors will have hard-to-find hay.

How Harmful Is It For Chinchillas To Bite Their Cages?

It depends on the type of cage you have. Some pens have coated wires to deter corrosion.

Galvanized wire can be dangerous if chewed because it contains zinc.

Other types of cage wiring are available, but it might be better to research into what kind of wiring is used in your chinchilla’s cage.

Replace the wiring if your chinchillas chew off the cage

Your chinchilla might not have enough toys or their diet is poor.

Chinchilla chewing is mainly caused by its need to wear down its front teeth.

Chinchilla’s teeth grow throughout their life. Chinchilla must chew to maintain their teeth length.

Otherwise, the teeth will grow out, making it hard for them to chew and eat food. This may result in infection and illnesses if the problem is not attended early enough.

Will Chinchillas Stop Biting Their Cage If They Are Given Chew Toys?

Chinchillas love to chew things. Providing them with a lot of safe and natural wood toys will keep them busy and focused on gnawing.

Toys are available in different sizes and shapes. There are even toys you can hang on your chinchilla cage to provide as entertainment.

You can install wooden shelves in the cage, at different levels for your chinchilla to climb and give them some exercise.

Chinchillas need to stretch their legs all the time but make sure there is no open wiring that might catch their legs.

Chinchillas also love to chew fruit tree branches. You can give them pear tree or apple tree branches that are not sprayed with any chemicals. Give your chinchilla some branches to chew on as they love chewing on these.

Never overfeed your chinchilla with treats. Treats are not suitable for chinchillas because their kidney cannot breakdown sugars.

Too much sugar in their system can cause death. If you must reward your chinchilla, spread out their treats.

Chinchillas may try to look cute when they want something, but keep in mind treats are not healthy for them, and they do not require it to survive.

It would be best if you were extremely watchful of your chinchilla, as they are a sophisticated, small animal.

Are Chew Toys Essential For Chinchillas?

Chinchillas need to chew. It keeps their teeth at the right length and healthy. Chinchillas teeth grow all throughout their life.

There are numerous flavors, shapes, and materials that chinchillas can chew.

Try to switch things up now and then by giving your chinchilla different chew toys. Chinchilla experts say that rodents love both hard and soft objects to chew.

Most chinchillas will chew anything. You should be careful and watch what they chew, especially if you leave your chinchilla out of their cage.

You must be careful of the surrounding environment. Some chinchillas even chew electric wires; others chew papers, books, and furniture.

You should make sure there’s no glue or anything harmful on the materials that your chinchilla is chewing.

When they chew they make several small bites in the same area that are non-aggressive and almost painless.

Does Biting The Cage Mean Chinchillas Have A Problem With Their Teeth?

If you notice that your chinchillas is having an issue with their teeth, take them to the vet who specializes in treating chinchillas. A noticeable symptom is that their teeth are overgrowth.

You might assume chinchillas want to get out of the cage, but if they are doing this for several minutes, there could be an underlying issue with their teeth.

They practically feel their teeth growing longer. That is why chinchillas can become aggressive chewers.

Remember, chewing is an instinctual behavior for chinchillas.

If they are over chewing it usually means that their teeth are getting too long or they aren’t getting the proper diet.

Which are some of the best chewing toys for chinchillas? 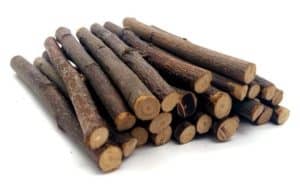 Apple sticks come from apple wood branches. The sticks are sweet and are healthy chew toys for your chinchilla’s teeth.

The apple sticks are hand-made and come in a package that contains 6-inch-long sticks.

The thickness varies from one package to another. Apple sticks contain high amounts of vitamins.

Gnawing and chewing on Sharleen apple sticks help your chinchilla trim their teeth and retain their shape. 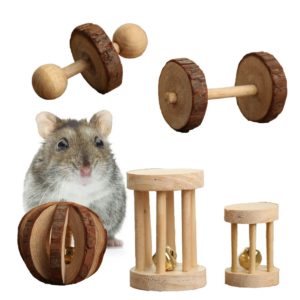 The Pevor natural wooden pine dumbbells chew toys for chinchillas are designed to entertain your chinchillas and help them trim their teeth.

The chew toys allow your chinchilla to exercise and play, ensuring they remain active and healthy.

Wooden pine chew toys are available in a myriad of shapes, but they have a delicate look, making them perfect for your chinchilla to work out and grind their teeth, making their lives comfortable and jovial.

The chew toys are made of natural wood with no pesticides or chemicals. They are very safe for the adorable friends to ensure they remain in excellent condition.

Wooden platform chewing toys are a perfect option for oral hygiene because they are made from safe materials.

Hence your chinchilla can have fun grinding their teeth and are an ideal resting environment.

The Alfie Pet Percy chewing wood platform measures 11.75 inches long, 6 inches wide, and a height of 6 inches to ensure you chins have enough materials to exercise, sleep, and eat.

Besides, the chewing toys add a touch of a natural feel to the chinchillas home.

The Alfie pet wooden chewing toy also comes with a string with chew on toys to ensure the little furry friends grind their teeth at any time of the day and keep entertained.

Is There a Difference between Nibbling and Chinchilla Biting?

Biting is different from grooming and nibbling. It can either be an aggressive or a defensive response. Angry or scared chinchillas will bite.

This usually happens when the chinchilla is in a new environment, mistreated, not properly socialized, or is fighting with other chinchillas.

If bleeding persists, consider visiting your doctor if need be. Chinchillas that are new to an environment can be afraid of fresh smells, sounds, and abrupt movements.

It would help if you gave your chinchilla some time to settle in their new home without being scooped up or chased around the cage.

Chinchillas usually bite to avoid being captured, kicking, or grunting.

If you do not socialize your chinchilla properly, they might start to bite.

If you leave your chinchillas for a long time without giving them any attention, they may become aggressive and bite any person that appears to invade their space.

If your chinchilla is not used to children, they can become frightened. Children are known to be move about a lot and are louder than adults.

They can get frightened when in the presence of children.

Kindness, love, and patience are crucial when it comes to handling chinchillas.

Why did my chinchilla bite me? Your chinchilla might have been frightened or thought you were a treat. Wash your hands before handling your chinchilla.

Does a chinchilla bite hurt?  It depends on how hard the chinchilla has bitten you. Chinchillas do like to nibble and will only aggressively bite when frightened. 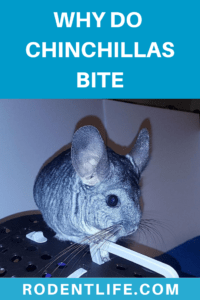 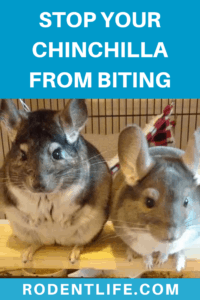 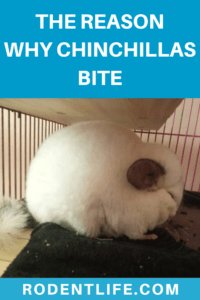