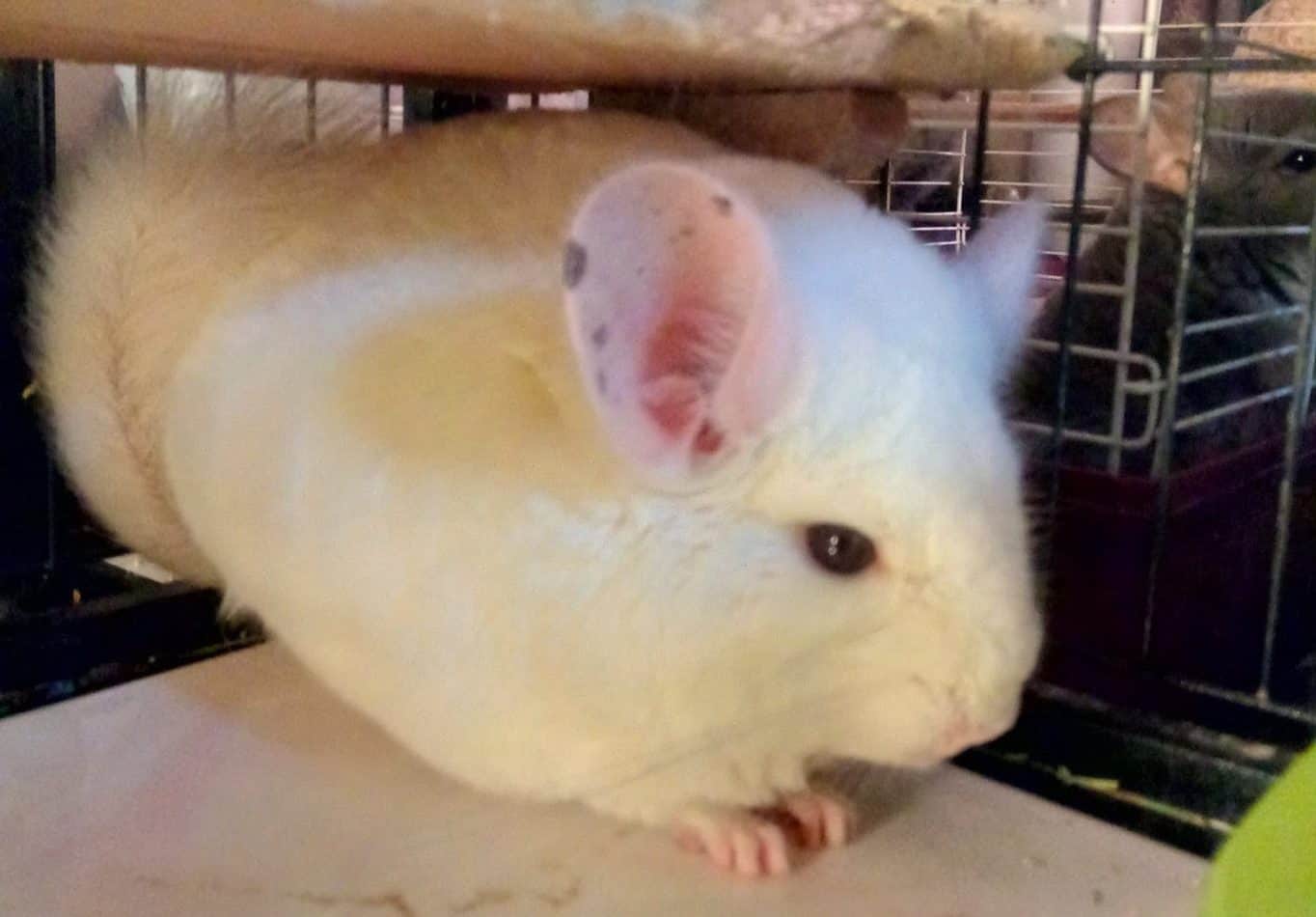 Chinchillas are beloved pets that come from the rodent family. They have dense and soft coats, large heads and bushy tails.

Where do Chinchillas Come From? Chinchillas originate from the Andes Mountains in South America.

These rodents belong to the family and come in two different species, Chinchilla lanigera and Chinchilla brevicaudata.

In the wild, chinchillas live in burrows or rock crevices at elevations of between 9,840 to 16,400 feet.

Chinchilla lanigera’s natural habitat is the rugged areas of north-central Chile’s chain of mountains which is barren and arid.

This area has a bitter climate characterized by summer temperatures of 86 °F (30 °C) during the day and 44.6 °F (7 °C) at night. During winter, the night temperature may drop below freezing point.

The terrain rocky or sandy and features thorny shrubs, and herbs. The area also has sparse cacti, while closer to the coast, there are spots of luscious bromeliads.

Chinchillas are very high jumpers and can jump up to 5 feet high.

Both species of chinchillas are social and form colonies. The females are dominant and demonstrate high levels of hostility.

These chinchilla colonies range from a few to more than 100 rodents, and sometimes more than a hundred individuals formulated into smaller groups, spreading more than 100 hectares of land.

WARNING: Don’t feed this to your pet chinchilla as it can make them ill

Chinchillas are mainly herbivores and feed on grass and seeds. It has been observed that these rodents can also feed on insects.

Wild Chilean chinchillas have a wide variety in their diet, with about 24 plant species, primarily grasses, and herbs.

Their diet changes depending where they are and what time of year it is.

Chinchillas have a longer gestation period among rodents at 111 days, and they can breed all year round.

Some predators in the wild are canines, hawks, felines, and skunks.

Magellan-homed owls prey on young chinchillas, whereas Culpeo foxes prey on both adults and the young ones.

Chinchillas have defensive mechanisms against predators such as if bitten, they release fur and can also spray urine.

What is Some Common Comparison of Chinchilla Species?

The two chinchilla species, c. lanigera and c. brevicaudata have slight differences. The brevicaudata variant has short tail and ears, with a thick neck and shoulders.

The lanigera species can have a body length of up to 10 inches and 5.1-inch tails. Short-tailed chinchillas measure between 12 and 13 inches in length and have a tail that is 4 inches long.

Domesticated chinchillas are sexually dimorphic with the females weighing around 800 grams, whereas the males are 600 grams in weight.

Wild males chinchillas weigh between 369 and 493 grams, which averages to about 423 grams.

The long-tailed chinchillas, which live in Chile’s mountainous regions are also known as Chilean, coastal or lesser.

The short-tailed ones also go by the names, Peruvian, Bolivian, or Royal chinchillas, and mainly occur around north-western Argentina, in the southern parts of Peru and Bolivia, as well as, in northern Chile.

What is the history of chinchillas?

The name “chinchilla” means “little Chincha.” The name originates from Andes’ Chincha people who used to wear the rodent’s fur.

From the 16th century, international trade in chinchilla coat has been in existence.

The chinchilla fur is beloved for its softness which results from the fact that the high density of hairs arising from each hair follicle.

The clothing industry uses the fur for small apparel or the lining of large garments.

A single coat can only be made from many chinchilla furs, and that led to their decline in numbers.

Today chinchillas are bred in farms and aren’t hunted as much.

Juan Ignacio Molina, a Jesuit priest, became the first person to describe chinchillas accurately. In 1810, Juan came up with the idea of breeding these rodents for profitable gains.

What followed were many efforts to breed chinchillas, with the first success detailed in a report by Frederico Albert, director of Santiago’s Zoological and Botanical Research Station.

In 1895, Frederico received a pair of chinchillas which reproduced that same year and every year after that; he got two litters.

This success came to an end in 1896 after an epidemic struck and killed the rodents in less than two months.

Are there any threats and conservation measures for chinchillas?

Early explorers claimed to have seen hundreds of chinchillas every day, back when they were plentiful.

However, there was large-scale commercial harvesting. Between 1895 and 1900, pelts exports stood at around two million.

The United States imported more than 200,000 pelts in 1905. With time, chinchilla became rare, and fur prices increased incredibly, resulting in more hunting of the rodents.

The early 20th century saw the collapse of both chinchilla species. In the 1890s, Chile began implementing conservation measures for the short-tailed chinchillas, although unregulated.

In 1910, Argentina, Bolivia, Chile, and Peru signed a treaty that brought the first international attempts to prohibit hunting and marketing of chinchillas.

These attempts increased prices, leading to a further decline of the chinchillas. It was until 1929 when Chile passed the first fruitful protection law.

Chile considers the Chilean chinchilla an endangered species, the IUCN lists them as vulnerable.

In the 1900s, the entire chinchilla population almost got eliminated due to over-harvesting.

Even with the protection they got, poaching went on, and the Chilean chinchilla was assumed extinct by the 1950s.

In 1978, there was a rediscovery of wild chinchilla populations which led to the creation of Reserva Nacional Las Chinchillas in Chile, consisting of 4,227 hectares.

Currently, the protected colonies in Chile’s reserve are only 19 although there are 42 known colonies.

The wild population of chinchillas stands at an estimated 2,500 to just over 11,000 rodents.

This number is declining due to human activities dating back from 1987. Since 2004, no conservation endeavor is running in La Higuera, Chile.

How Long Do Chinchillas Live?

Chinchillas can surprisingly live for more than 20 years.

Other pet rodents have shorter lifespans than chinchillas. Chinchilla’s lifespans are a very long commitment.

According to the Guinness World Record, the oldest chinchilla died at the age of 29 years and 229 days in 2014.

The German-born chinchilla named Radar passed on in California.

Why Don’t Chinchillas Live as Long in The Wild?

There are several reasons why chinchillas lifespan in the wild is reduced. Firstly,  they are prey for many animals including wild cats, fox, owls, and birds of prey. S

secondly, chinchillas are hunted because of their coats which are used for human pleasures.

Lastly, their natural habitats have been destroyed by man. If these human actions persist, chinchillas will become instinct sooner, as they are already considered endangered.

What are some reasons chinchillas live longer in captivity? Pet chinchillas receive great medical care, balanced diet meals, nice shelter, and other amenities. Wild chinchillas, on the other hand, have to stress over food, hide from predators, and cope up with the harsh weather.

Are chinchillas easy to care for? It is easy to look after chinchillas because they are very clean, rarely aggressive, they are odorless.  Although chinchillas require a lot of attention every day.