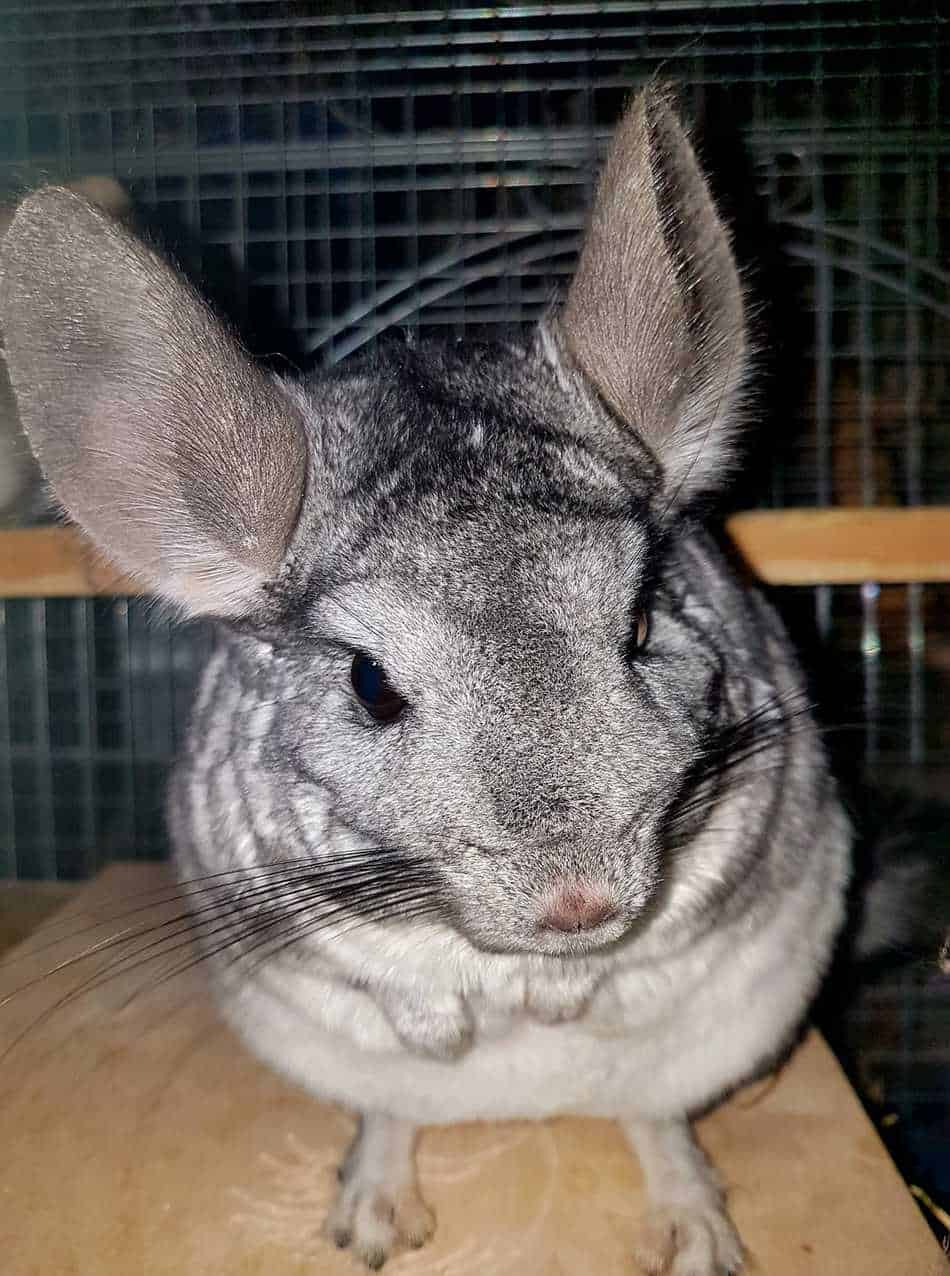 Chinchillas love to chew all sorts of objects around the house. Sometimes they even chew their fur which may cause thinning and bald spots. You can stop this behavior by providing your chinchilla with basic needs.

Chinchillas that are stressed are likely to chew on their fur. They could be stressed for many reasons. Some chinchillas get stressed out by living in a dirty or noisy environment.

Chinchillas chew on objects around them such as wood to help trim their teeth.

Chinchilla’s teeth are always growing so it’s important that they have the correct diet and chew toys to keep their teeth the correct length.

Stress and boredom are two other reasons a chinchilla may start to chew.

Since you cannot stop your chinchillas from chewing, make sure they have plenty of stimulation, such as an exercise wheel and a large enough cage to prevent them from getting bored.

You should let them out of their cage for at least an hour per day to play and exercise.

Factors such as loud noises and high/low temperatures can stress your chinchilla out.

You should keep your other household pets separated from your chinchillas as they have been known to cause your chinchilla stress. Especially cats and dogs!

Do Environmental Factors Cause Chinchillas to Chew?

There are several environmental common factors that could cause chinchillas to chew:

Some kittens (young/baby chinchillas) have been trained by their mothers to chew.

An unstable environment can put a lot of stress on your chinchillas.

If another chinchilla is harassing/bully a chinchilla this can cause a lot of stress.

Other factors such as an unclean cage and lots of noise can also cause stress.

A chinchilla may chew when they are bored or don’t have enough to do.

Chinchillas are social animals. In nature, they live in herds of up to 20 – 100 other chinchillas.

You could consider getting your chinchilla another chinchilla if you feel like they are bored, or buy them more toys to keep them active during the hours you’re not there to entertain them.

Problems with their teeth

Sometimes a chinchillas teeth can get too long which may cause excessive amounts of chewing so they can trim the size.

If chewing doesn’t work a visit to the vets is needed.

Skin conditions can also prompt chinchillas to chew their fur. Phantom-limb syndrome, a condition caused by amputation is another factor that triggers chewing in chinchillas.

Signs Your Chinchilla is Chewing

It’s easy to know if your chinchillas start to chew. You will be able to see markings on different areas, but chewing may be in more than one area.

if they’re chewing on their fur, it will appear ragged and cut. You may see patches on different parts of the body except for the head unless you have two chinchillas in the same cage.

Areas of the body that are prone to be chewed are the limbs, flanks, and shoulders.

Chinchillas that are stressed may chew the skin until it is irritated and red.

How To Stop Your Chinchilla From Chewing

To stop your chinchilla from chewing you need to make sure they have the correct basic food and water requirements.

Chinchillas need a constant supply of timothy hay, water from a water bottle and a small daily handful of grass-based pellets.

A great way to reduce how much your chinchilla is chewing is to provide them with plenty of wooden toys and blocks to chew on.

I have written a list on the best treats that your chinchilla can gawn on. Not only it stop them chewing it will give them objects to gawn on so they can keep their teeth healthy.

With anxiety and stress being the most common reason for your chinchilla to chew, it is crucial to find out the root cause of the problem.

Sometimes chinchilla will excessively chew to help trim their front teeth. Chinchilla’s teeth are always growing so it’s important that they have the correct diet and chew toys to keep those teeth the correct length.

You should set a schedule for feeding and play time as this may help reduce stress. Chinchillas love routine.

If the surroundings are too noisy or busy for your chinchillas, move the cage to a quieter environment.

Sometimes a chinchilla will chew when they are bored. This could be because of not enough cage space or toys to play with.

Chinchillas are extremely sociable animals and do best with the company of another chinchilla.

While you may want to adopt some more chinchillas, it is crucial to have a careful approach to introduce them to each other. It isn’t a straight forward process as they are known to not get on at first.

If they are chewing their fur and it becomes a severe problem it’s best to take them to the vets.

Is There Treatment for Chinchilla Chewing?

There is no medical treatment for chinchilla chewing.

The best you can do as a chinchilla pet owner is to determine what stresses your chinchillas and get rid of the problem.

You need to give your chinchilla enough toys to chew to use. Hopefully, they will start chewing toys and stop chewing their fur or the cage.

Also, make sure to move the cage to a quiet place.

Fur chewing can be severe.

Chinchilla can chew every part of the body they can reach.

Chinchillas should be kept at the right temperature and care for correctly. Establish a routine for playtime and feeding.

This measure may reduce stress and stop reduce fur chewing.

Most of the time, chinchillas will continue fur chewing despite any effort to make them stop.

One of the reason they fur chew is to reduce stress. By chewing their fur it helps eliminate stress.

Many chinchillas will stop chewing for some time and then start again.

Some chinchillas will also chew their mate’s fur. If you notice one of your chinchillas bitten in an area it could not have reached, like the head, then another chinchilla might have done the chewing.

If one of your chinchillas is chewing on others, separate them immediately.

Keep in mind there is no medical treatment for chewing.

How To Train Your Chinchilla Not To Chew

There are products on the market that can help to stop your chinchilla from chewing certain objects.

Fooey is a spray that you can use to spray on objects to and is extremely bitter and may stop your chinchilla from wanting to chew certain objects.

Start in a tiny space such as laundry or bathroom where you can supervise your chins.

When the rodents start to nibble, tell them “No Chewing” in a gentle voice.

Never shout at your chinchillas. If chinchillas don’t stop to chew, move them firmly but gently to another place and spray the chewing area with a spay such as Fooey.

Use positive reinforcement. If the chinchillas heed to your warning of “No Chewing” and they cease to chew, tell them, “Good Job” and give them some scratches while congratulating them.

Make sure you have plenty of tasty foods and tools and a variety of them for the chinchillas to chew.

Your vet can help determine the main reason of why your chinchilla is chewing.

The first step would be to assess the pets and ask you questions about how the chinchillas are living and how you are taking care of them to figure out the cause.

Once the vet determines the cause, they will recommend changes that need to be made.

However, keep in mind this is a trial and error process. Therefore, you need to deal with it more than once before you get a permanent solution.

In addition, your doctor may give you either tablets or papaya cubes to prevent your chinchilla from contracting a hairball from chewing their fur.

Do chinchillas chew wires? Chinchillas love to chew household objects including wires and furniture. It would help if you cover these materials or keep them away from your chinchilla.

Why does my chinchilla have a bald spot? Your chinchillas may be chewing their fur or have other health complications that may cause bald spots. If it gets worse consider a trip to the vets.

Will chinchilla fur grow back? The chinchilla’s fur eventually grows back but usually takes about six months. 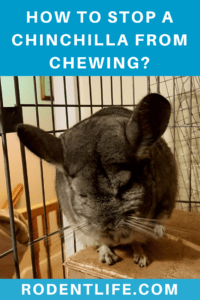 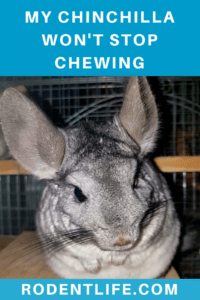 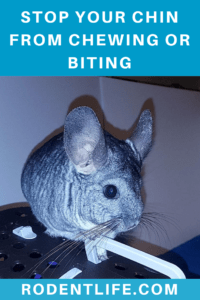