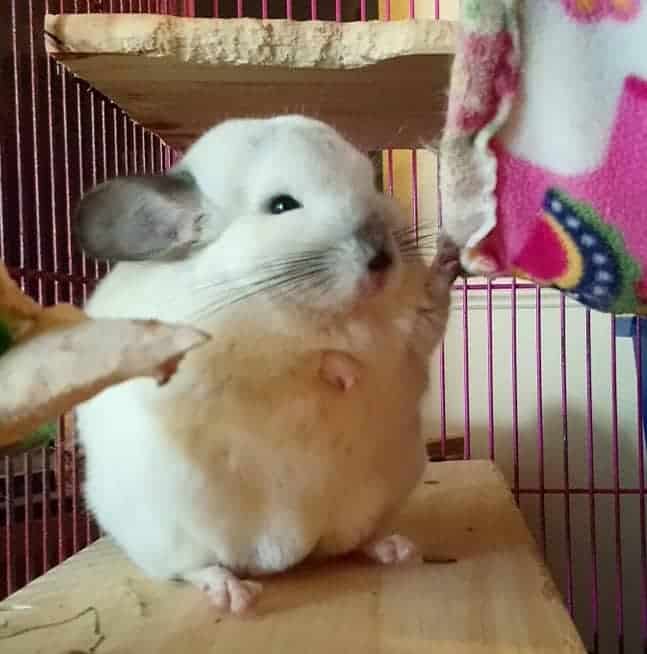 Chinchillas are the furriest rodents on the planet that originated from South America.

How big do pet chinchillas get? Fully grown adult chinchillas can grow to an average size of 9 to 10 inches (23 to 38 cm) with an addition 3 to 6 inches being their tail, and an average weight between 1 – 2 pounds.

When chinchillas reach adulthood, health, good diet, and genetics affect the size of chinchillas. Some chinchillas will reach their maximum weight by one year old, whereas others will continue to grow to the maximum size by the second year. Larger chinchillas can grow to a weight of 3.5 pounds.

In certain occasions, a chinchilla may grow to more than 6 pounds although it is an exception. With a good diet, regular interaction, and clean environment, chinchillas can maintain their weight all through their lives.

Chinchilla’s Growth from Birth to Adulthood

Wild chinchillas live a lot less with an average life expectancy of 8 to 10 years due to predators and habitat conditions.

How Big Do Chinchillas Get?

When baby chinchillas are born they will have a full fur coat.

Baby chinchillas are called kits and may be wobbly at birth and want to be close to their mother for food and warmth. 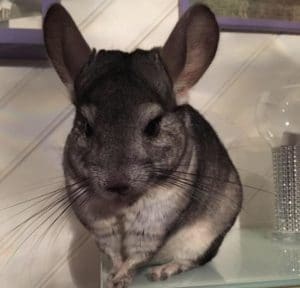 As chinchillas reach their senior years, they start to lose their body mass.

Gender does not affect the size of chinchillas, although genetics does.

Chinchillas can be overweight.

Obese chinchillas normally show visible fat pouches around their armpit or neck and may cause more health issues than a leaner animal.

If you have an overweight chinchilla, reduce the number of fatty foods and treats that you give it.

How Much Space Does My Chinchilla Need? 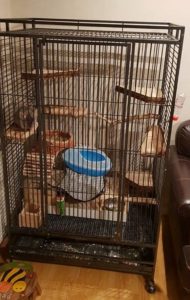 Chinchillas can grow large, plus they are active animals. For this reason, they need ample space.

It is important to make sure your chinchilla has the correct cage. I have written a list on the 10 best chinchilla cages that are currently on the market.

According to the Veterinary Center for Birds and Exotics, the minimum cage size for adult chinchillas should be three by two by two feet.

If you have more than one chinchilla you will need at least 2sq.ft of floor space per chinchilla. Chinchillas are naturally social animals and like the extra company.

If the base of the cage is wired, place a solid material such plywood so that the chinchillas aren’t standing on wires. Standing on the wire can trigger pressure sores on chinchillas feet.

How many floor levels should my chinchilla cage have?

Your cage should have several levels for chinchillas to jump and climb.

Chinchillas can jump as high as 6 feet, and therefore you need a large cage.

Since chinchillas are prey animals, make sure the cage is above the floor. Otherwise, they can get anxious. Put the cage on a stand or table.

If you want to breed your chinchilla, consider a single-level unit for the mother during pregnancy.

Kits (baby chinchillas) can climb soon after they are born. When they are young their cage shouldn’t be too high as they can easily fall and injure themselves.

The cage should be placed away from the drafts and direct sunlight.

Do not place your chinchilla in a cold, hot or damp environment. Chinchillas are extremely sensitive to heat and don’t have sweat glands, therefore they can’t cool themselves down as fast as humans.

Chinchillas cool themselves down by lying on a cold object such as a stone or rock. You can buy stone slabs for your chinchilla to lie on. (see image on the left).

Make sure their habitat temperature is not above 80 degrees, or they can die. The temperatures must not fall below 50 degrees.

Make sure the care is always clean for your chinchilla’s health.

How Do You Weigh Chinchillas?

While weighing your chinchilla and to determine their size and weight isn’t mandatory, many chinchilla’s owners like to do it to make sure their chinchilla is healthy.

Chinchilla owners usually regret not weighing their pet. Since some illnesses don’t show any visible signs, measuring their weight is the best way to know how the animal is doing and is a quick way to determine whether they are ill.

What tools should I use to measure chinchillas size and weight?

You can buy scales online or in stores.

A digital kitchen and food weighing scales are ideal because it can weigh up to 12lbs. Just make sure you clean them afterward!

There is a variety of styles such as oval, circular platforms, curved, and rectangular weighing scales. Many people prefer to use curved platforms because they are easy to use.

Make sure your chinchilla’s scales are calibrated. If you don’t already have a weight that you can weigh, you can check this buy weighing money or common objects where you know the weight too.

Most chinchillas weigh less than 4 pounds.

Make sure to weigh your chinchillas from time to time to not only know how much they weigh but also to assess their health status.

Every chinchilla owner will have their own routine with some weighing weekly, monthly, or occasionally when they think they should weigh their chinchillas.

The routine will also help you bond with your chinchillas and establish a level of baseline interaction.

Your chinchilla’s weight can change day to day with upwards to 20 grams. This could be because of consumption, adjusted routines and other factors.

Weight and size are important indicators of your pet’s health.

When weighing your chinchilla it is a good idea not to weigh them too far away from the cage. Reducing distance makes the entire process quicker and less stressful.

Be patient when handling your chinchillas as they aren’t keen on being handled, they may scurry away.

Steady the chinchilla and make sure the tails aren’t touching the ground or any object as they may weigh less and won’t be an accurate reading.

Between 8 and 12 weeks, when nursing diminishes, baby chinchillas turn into ‘weanlings’.

In most occasions, they are separated from the mother and put in different cages either alone or as a group of the same sex.

This transitional period is extremely stressful for young kits.

Therefore, it is crucial to monitor them by making sure they eat and thrive properly.

Chinchillas are normally aggressive during this time. They are very energetic and busy with a lot of curiosity. You should handle them with great care and keep them safe.

After the weaning stage, they enter the juvenile phase for almost six months.

At this stage, chinchillas grow, develop, and learn.

They can either do this alone or at times with other chinchillas of the same sex or with guidance from their parents.

Male chinchillas are usually ready for breeding purposes at between 9 and 12 months.

Chinchillas usually become adult when they reach a year old. However, some may continue to grow for up to 2 years to reach maturity.

Both female and male chinchillas are energetic and active young adults. They continue to be active for many years if they are taken care of properly.

The aggressiveness of chinchillas depends on how they feel and genetics rather than how old they are.

Just like human beings, chinchillas can also get serious diseases, have genetic complications, and become sick which can reduce their lifespans.

How Do You Ensure Chinchillas Grow To Their Maximum Size?

One way to ensure your chinchillas grow to their maximum size is by ensuring they have a proper diet. Their dietary requirements are different from other rodents.

You must feed them with quality chinchilla food. Otherwise, their health will be at risk. Chinchillas need plenty of fiber, and their diet must contain mostly of grass hay and small amounts of chinchilla pellets. You should give your chinchillas pellets in moderation.

While commercial-mixed food contains corn, seeds, and chinchilla pellets, which is nutritionally balanced, your chinchillas may not want to eat specific brands or foods.

Chinchillas are quite choosy when it comes to what they eat.

Even if you purchase high fiber food, you must supplement it with hay to make sure your chinchillas get enough roughage.

Fiber helps chinchillas keep their digestive system in shape and their teeth in good condition.

You should clean out hay every day to keep it from becoming moldy.

While pressed cubes of hay are great, it is still better to feed your chinchillas loose hay because it contains long strained fiber.

How big will my chinchilla get? Chinchillas can grow as big as 30cm (12 inches) when fully grown. Usually, the female grows bigger than the male chinchillas. However, this depends upon various factors such as food, environment, health status, and genes. Chinchillas can weigh more 700 grams.

How long until a chinchilla is full grown? Chinchillas take about eight months to grow to maturity. However, some continue to grow until they are about two years. But this depends on the chinchillas. 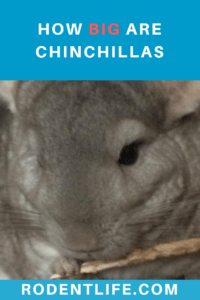 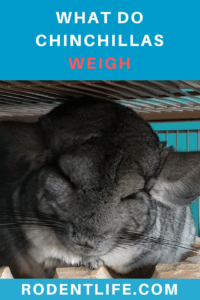 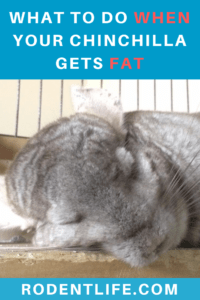