Guinea pigs are known for their delightful squeaks and squeals, but what do those sounds mean? From happy sounds to popcorning, guinea pigs have a way of communicating that is entirely their own.

What sounds do guinea pigs make? Guinea pigs make a variety of sounds, including whistling, which usually indicates happiness, as well as purring. They may rumble to show their dominance and shriek when frightened.

Guinea pigs communicate with each other and with you through a series of whistles and squeals. When they’re happy, they may also hop around, which is known as popcorning.

When your guinea pig is upset or scared, he can also communicate with you. They rumble to show their dominance towards another guinea pig, while they purr when they’re happy and being cuddled.

Guinea pigs also communicate through chemical messengers, by scent marking. They can also urinate on things to mark them as theirs.

Guinea pigs make a series of noises to communicate with you and other guinea pigs. Understanding these sounds can help you have a better relationship with your guinea pig.

Many times, your guinea pig will make gestures at the same time that they are making sounds, and this can help you determine what they’re trying to say. A grumble that occurs at the same time as your pig flashing its teeth can be an act of dominance.

Guinea pigs may also go about their day making small sounds, like grunts and squeaks. These sounds are typically normal and are just your guinea pigs way of communicating with the other pigs in its environment.

The most common sound you will hear your guinea pig to make is likely to be a series of high pitch squeezes. These squeezes usually indicate that they are excited. They like to make these squeezes during feeding or playtime.

What Sounds Do Guinea Pigs Make?

Guinea pigs make a series of different sounds that are associated with different behaviors and feelings. Your guinea pig makes these sounds to let you and the other guinea pigs around it know how it is feeling, such as happy or irritated.

The video below does a great job at showing all the different sounds guinea pigs make with video/audio examples.

Like with the sounds they make guinea pigs also communicate with body language, just like people and other animals. These movements can indicate happiness or excitement, as well as annoyance or fear.

Guinea pigs may also demonstrate to other guinea pigs that they are frustrated or annoyed, such as by yawning or teeth chattering.

Your guinea pig may also demonstrate its dominance over other pigs in the cage. This can take the form of urinating on the other guinea pig or mounting it.

How Do Guinea Pigs Communicate With Humans?

Guinea pigs communicate with humans largely through vocalizations and other sounds, although they do have some behaviors to let us know that they are happy or bothered by something.

Wheeking and purring are two common vocalizations that guinea pigs do to let people know that they are happy or excited. At the same time, you might see your guinea pig popcorn, or hop up and down, while it is wheeking.

Your guinea pig may fidget when it is tired of being held or toss its head back. Some guinea pigs will also freeze or run away when they are in an uncomfortable situation that startles them or makes them nervous, such as being held if they are not used to it.

What Noises Do They Make When They Are Happy?

Guinea pigs will coo to each other when they are happy or contented, especially in the case of mothers with their young. It can be a reassuring sound to the other guinea pigs.

When guinea pigs are unhappy, they may be more irritable and exhibit signs of stress. They are often more likely to get sick and have health issues.

How Do Guinea Pigs Show They Are Scared?

Guinea pigs exhibit a range of sounds and expressions when they are nervous or scared. From running away to freezing in place, as well as the sounds they express, you can tell when your guinea pig is nervous or scared.

When guinea pigs are upset, they may chatter their teeth, which can often be accompanied by a yawning behavior while they make the sound. This vocalization typically means that they want you or other guinea pigs to stay away.

At the same time as making teeth chattering noises, your guinea pig may hiss when frightened or upset. This sound can be very like a cat hissing.

If your guinea pig gets scared or hurt, it might make a high pitched shrieking sound. This alarming sound should be investigated immediately as your guinea pig could be injured or maybe threatened by something.

If your guinea pig gets startled, you may find that it freezes. They will remain motionless when they are scared.

On the other hand, when your guinea pig gets scared, it may do the opposite of freezing and instead run away. This can occur when something frightens them or if they don’t want to be handled by you. Often they will run away and hide in an enclosed area such as a box or hide behind something in their cage.

When threatened, your guinea pig may show aggressive signs, such as strutting or rearing up on its back legs. They may also chatter their teeth or yawn to exhibit their worry or displeasure.

Signs Your Guinea Pigs Are Angry

Guinea pigs are very happy and any unhappiness or angry doesn’t usually last long. They are prey animals and will tend to flee if they have the chance.

When they do get angry they may start to threaten another guinea pig, so it is important to know the signs when your guinea pig is experiencing unhappiness or anger.

Teeth chatterings is a common sign of an angry guinea pig and is a warning sign they will make when they want you or another guinea pig to back off.

When they fight they will try to become more dominant over another guinea pig by chasing them and touching their butt. if your guinea pigs start to fight it is best to separate them and then try to reinduce them to each other in a day or two when everything has cooled off.

Hissing or showing their teeth is another sign they are happy or angry.

Tossing their head/neck in the air is anther sign and they are trying to appear bigger than the other guinea pigs.

Flur puffing is something else guinea pigs will do to appear bigger, although it may look really sweet/cute to a human it is supposed to be a warning sign towards other guinea pigs and suppose to scare them off.

Want to learn more about facts about guinea pigs? Vetstreet.com have some guinea pig facts that may surprise you.

What does it mean when a guinea pig squeaks when you pet it? When a guinea pig gets petted and lets out a squeak, it is often happy, especially when accompanied by other activities such as purring. Your pig may squeal though when scared or hurt. 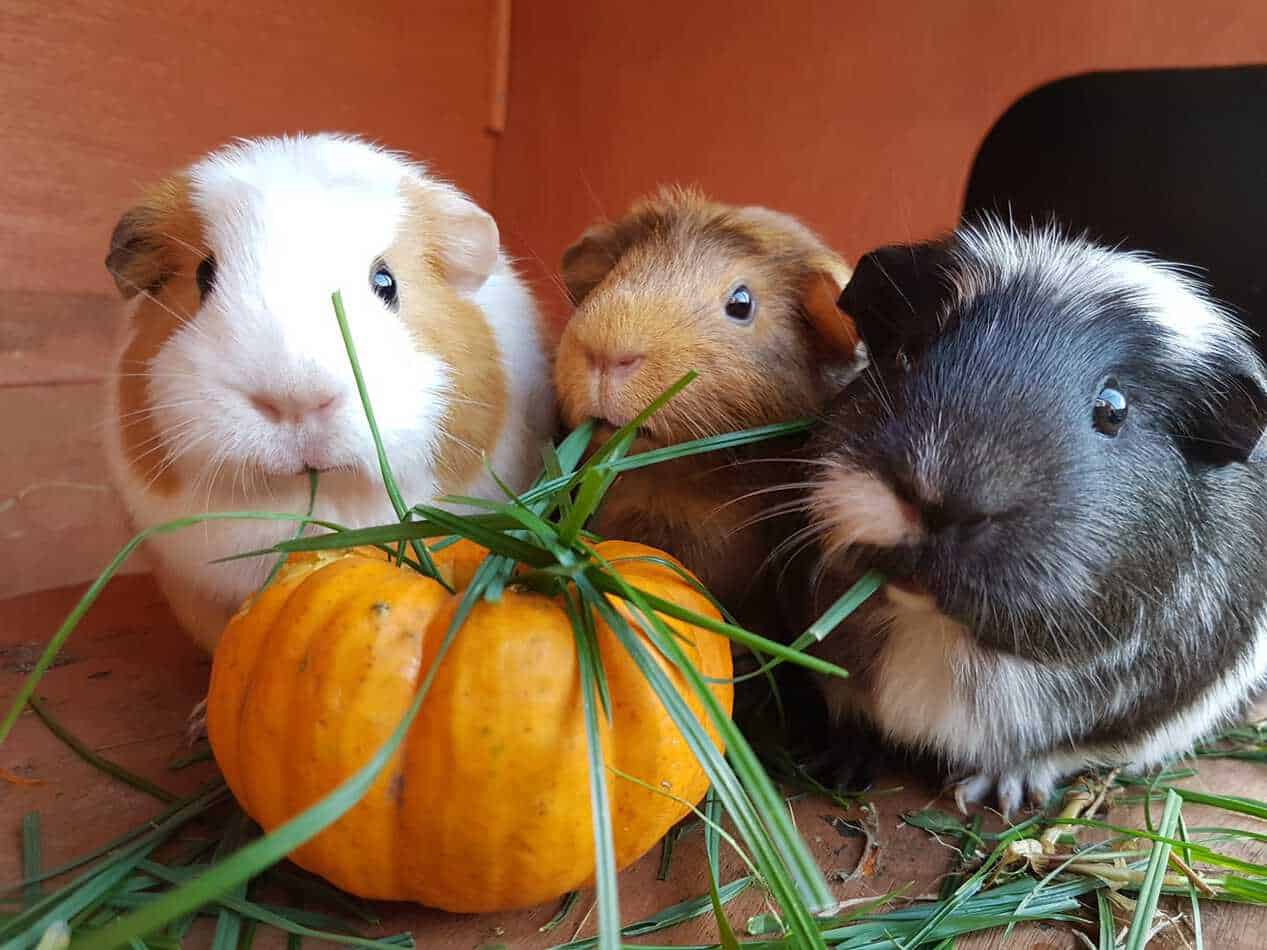 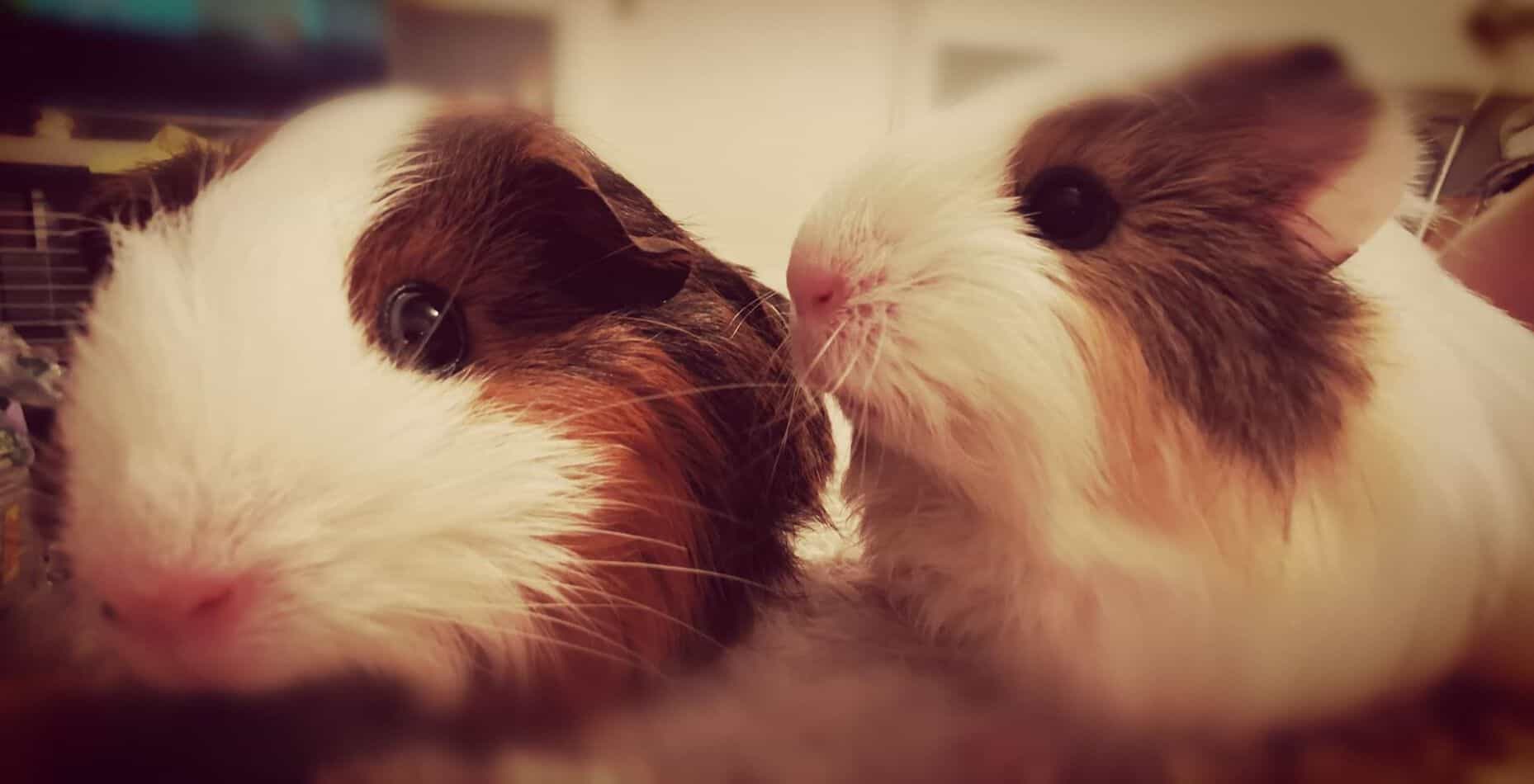 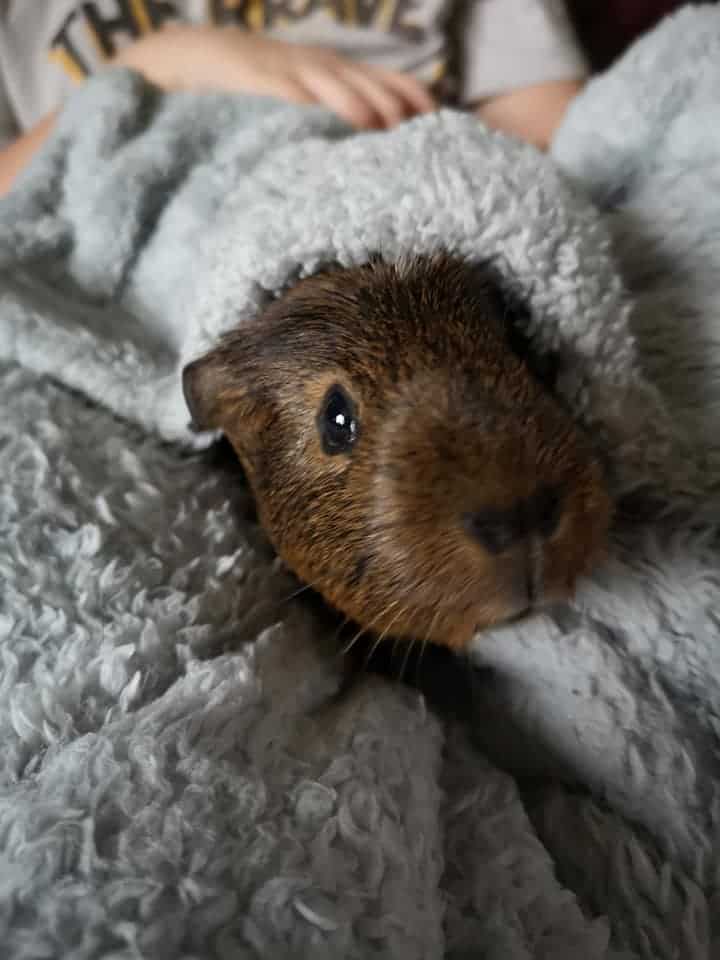 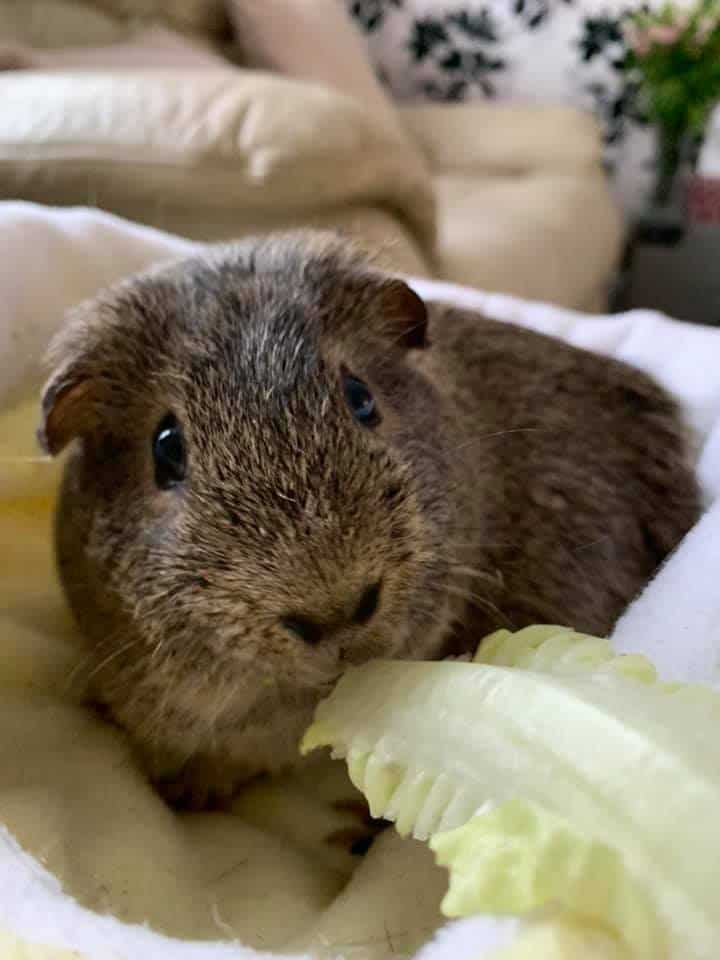