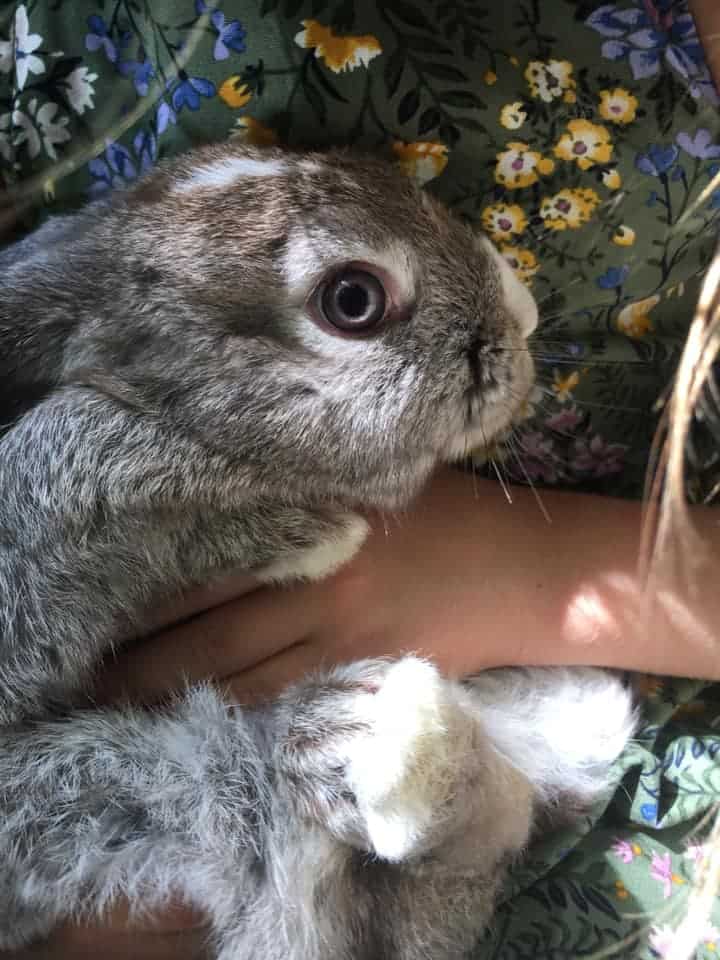 Many rabbit owners are not sure whether their furry friends can blink. This is not a surprise since rabbits don’t often close their eyes, so it’s only natural to wonder about it.

Do rabbits blink? Rabbits blink 10 to 12 times an hour to keep their eyes lubricated and to get rid of dust and debris that may have got into their eyes. Rabbits also have a third eyelid called a nictitating membrane.

Their third eyelid (nictitating membrane) allows them to keep their eyes open longer than humans and blink just 10-12 times an hour. In this article, we will discuss how and when rabbits blink and other interesting facts about rabbits and their eyes.

Rabbits blink but you may not be able to catch them since they do it so rarely. That’s why many people wonder whether they can blink at all. When rabbits blink, it is usually because they have some debris in their eyes, or because weather conditions are dry and they need to keep their eyes lubricated.

Rabbits have a third eyelid that never closes fully, which is why they are able to sleep with their eyes open and stay alert even when they blink. This is important for rabbits because they are low on the food chain in nature and have many predators.

Rabbits blink approximately 10-12 times per hour but they are able to blink even less if they feel scared or threatened. However, when they do blink, they do it as fast as humans. This is a bit slower than some other animals, like guinea pigs, which is why that third eyelid is even more important in keeping them away from predators.

Pet rabbits are likely to blink more often than wild rabbits because they usually feel safer and more comfortable in their predator-free environment. However, if your rabbit is blinking too often, it can be a sign of some eye problem, like an eye infection.

Do Rabbits Have Eyelids?

Yes, rabbits have eyelids. In fact, they have three eyelids instead of two like most mammals. The third eyelid, also commonly called haw, is more commonly found in reptiles and birds. However, some other mammals also have it, like dogs, cats, camels, etc.

The scientific term for this third eyelid is nictating membrane and it doesn’t fully close. It closes only partially when the rabbit is asleep. Otherwise, it only moves a bit past the rabbit’s cornea.

The main purpose of this third eyelid is to float across the surface of the eye in order to lubricate it and to protect the rabbit’s cornea from water, wind, sand and other elements. Humans and other mammals lubricate their eyes by blinking only. Thanks to the third eyelid, rabbits don’t have to blink as often as humans.

Do Rabbits Sleep With Their Eyes Open?

Yes, rabbits often sleep with their eyes open. That’s why many owners are not sure when their pet rabbits are actually asleep and may think that they don’t sleep much. However, rabbits sleep at least 6-8 hours a day but they may even sleep more if they feel completely comfortable in your home.

Rabbits can sleep with their eyes open thanks to their third eyelid. This eyelid never fully closes, which allows rabbits to stay alert even when they sleep. This is important for rabbits in the wild because it is a mechanism that helps them be aware of any predators. It can also give the predators an illusion that they are awake, which may sometimes deter predators from attacking them.

The third eyelid also keeps their eyes lubricated while they sleep, so they don’t need to close their eyes. However, if a rabbit is fully comfortable and safe in its environment, it may sleep with its eyes closed. It may take time for your pet rabbit to reach this stage, so don’t worry if you see your rabbit sleeping with its eyes open.

Some owners may find it hard to recognize when their rabbits are sleeping if they sleep with their eyes open. However, you can rest assured that your rabbit is sleeping if it twitches and wiggles its nose. Rabbits are often hyperaware when they sleep. That’s why they usually sleep in short bursts and wake up easily.

Do Rabbits Have Good Eyesight?

Rabbits are prey animals, which means that they rely on their eyesight and other senses to keep them away from predators. Staying on the lookout for predators is why rabbits rarely blink and sleep with their eyes open.

Rabbits have eyes located high on the sides of their faces. This, along with the shape of their skulls, allows them to have a nearly 360-degree vision. However, this doesn’t mean that they have perfect eyesight.

How Well Can Rabbits See?

As we already mentioned, rabbits have a panoramic vision. This means that their vision can encompass almost 360 degrees. Unfortunately for them, they do have a tiny blind spot because they can’t see directly in front of them.

While they can see a predator coming from any direction, the position of their eyes leaves them unable to see in front of their nose and under their chin. That’s why rabbits rely on their sense of smell and their whiskers to identify objects in front of them. You may notice that your rabbit needs some time to catch up when you put a treat directly in front of it.

Rabbits are also farsighted, which means that they can see objects at long distances really well. However, they don’t really have a really great vision when it comes to items nearby.

Another problem that rabbits have when it comes to their eyesight is depth perception. In fact, their depth perception is practically non-existent. Rabbits can see objects well, but they may not know how far those objects actually are just based on their vision. They use their other senses to determine the range of an item, like scent and hearing.

Yes, rabbits can see color but it is believed that they are partially color-blind since their eyes are only sensitive to green and blue light waves.

Mammals have two types of light-sensitive cells in their retinas – rods and cones. Cones have a job of detecting bright light. They also have pigments that give mammals the ability to see different colors. Rods, on the other hand, don’t have pigments and help mammals see in low or reduced light.

Can Rabbits See In The Dark?

Rabbits are crepuscular animals, which means that they are most active at dusk and dawn. This is why rabbits have the best vision in dim, low-light conditions. However, they don’t have night vision and can’t see in the dark.

As we mentioned before, rabbits have more rods than cons. This helps them see well in reduced light. However, they have no tapetum, which is a reflective layer in the eyes of animals who can see well in dark. This layer causes eyes of nocturnal animals with good night vision to shine in the dark.

In addition to poor night vision, rabbits also have significantly reduced eyesight in very bright light conditions. That is why rabbits sleep during the day and are most active at dusk and dawn.

How to Treat My Rabbit’s Eye Infection?

Rabbits don’t often suffer from eye problems but they are not immune to them either. One of the most common eye problems in rabbits is an eye infection. Eye infections in rabbits can be caused by bacteria or fungi and if left untreated they can have serious consequences.

Symptoms of Eye infections in Rabbits

The most common symptoms of eye infections in rabbits include:

How to Treat It?

While eye infections are often treated without taking a culture sample, in some cases this may be necessary to determine the type of bacteria and decide on the best course of treatment.

Other Eye Problems in Rabbits

Rabbits can also have other eye problems. Although the symptoms are mostly the same as with eye infections, treatment for these conditions may vary.

Abscess – Rabbits can suffer from thick abscesses in their eyes. They are easily spotted and filled with sticky, creamy pus. In most cases, swelling of the eyeball is the most noticeable symptom of this painful condition. Abscesses are usually caused by an infected bite or scratch.

Cataract – Cataract, or cloudy eye, in rabbits is caused by many different factors, like diet, infection, trauma and genetics. Cataracts are easy to notice since they come with one characteristic symptom – the opaque appearance of the lens. Surgical removal is the primary treatment option.

Glaucoma – This is usually a hereditary condition, mostly occurring in the New Zealand White rabbits. However, it can also be caused by some other eye conditions, like uveitis or intraocular neoplasia. Major symptoms include cloudy white cornea and blindness. Treating glaucoma is often difficult and frustrating and includes topical medication and surgery.

Corneal Ulcers – Eye ulcer is a hole or some other defect in the cornea. It can be a tiny spot but it can also cover almost an entire eye. Regardless of their size, ulcers are pretty painful. They are usually caused by a trauma to the rabbit’s eye that leads to damage of the cornea. You may notice that your rabbit is keeping its eye shut if it suffers from corneal ulcers but it may also scratch its eye with its paws.

Conjunctivitis – This condition is also known as “pink eye” and it describes an inflammation of the conjunctiva, which is the pink flesh surrounding the rabbit’s eye. It is often caused by unsanitary conditions, like dirty water or bacteria-infested environment.

How to Prevent Eye Problems

Some of these common eye problems can be prevented by good hygiene. Make sure to clean your rabbit’s living area regularly in order to make it as dust-free as possible. Dust and similarly small particles are often the cause of eye problems in rabbits. You also need to ensure that your rabbit’s bedding is clean.

Check your rabbit’s eyes regularly in order to prevent any small issues from turning into something serious. Call your vet as soon as you spot any changes in the appearance of your rabbit’s eyes, no matter how minor they may seem.

Do rabbits eat their poop? Yes, rabbits often eat their droppings, especially after digesting a meal. They will eat their poop and process it for the second time. Keep in mind that poop is an essential part of a rabbit’s diet, so just let your pet do its thing.

Do rabbits have feelings for their owners? Rabbits are very sociable, friendly and loving pets. They need to spend time with their owner as they’ll get bored without social interaction.