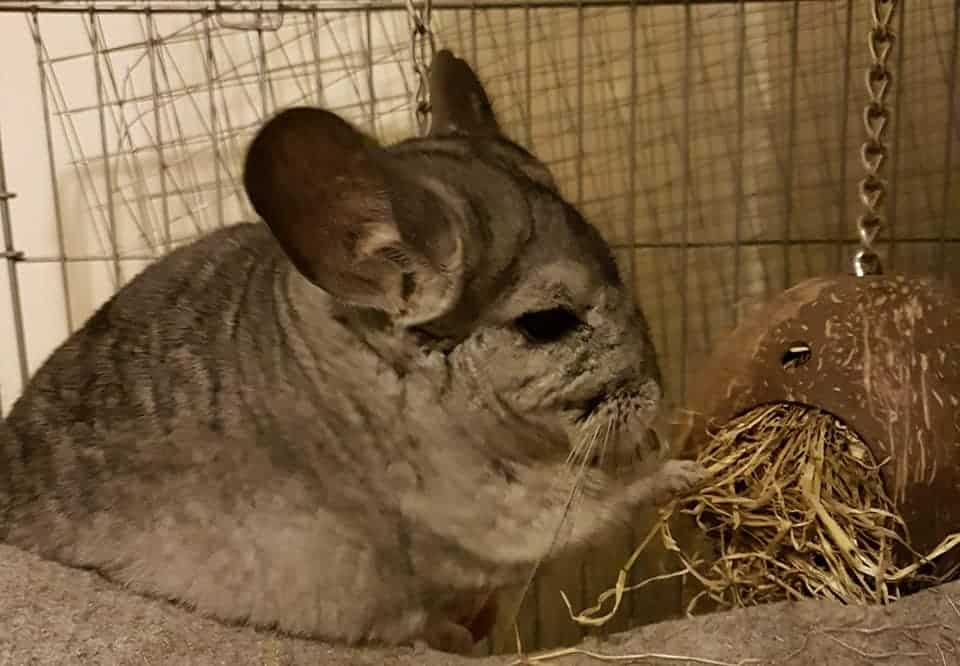 Chinchillas can make great pets and at times are very vocal animals. Just like other animals, chinchillas will make noises for different reasons.

Chinchillas make a variety of different sounds depending on their current state and mood. One of the most common sounds they make is when they bark. Chinchillas bark for many reasons and is a way they can communicate with other chinchillas.

When Do Chinchillas Make Noises?

Chinchillas make noises when there is danger or when they are angry, happy, excited, frightened or stressed.

Chinchillas might bark when there is loud noises such as nearby cars. They also make contact and alarm calls.

They will make contact calls when happy or comfortable.

On the other hand, when they are in fear or pain, they will make an alarm call sound.

When you spend more time with your chinchilla you will start to understand what each sound means.

Chinchillas are the loudest when they are most active during the times of dusk and dawn.

They will move around their cage, use their wheel and eat and drink which can create noises.

Although chinchillas are loud you can buy silent running wheels that don’t make as much noise. I have put together a list of the best, slient and safest wheels on the market.

It’s wise not to keep your chinchilla in your bedroom as they will likely keep you up at night.

They can also bark and make vocal noises but they aren’t known for being extremely loud.

What Types of Noise Do Chinchillas Make?

The following are examples of the noise chinchillas make:

This sound is known as Supplication. When chinchillas are very comfortable, they make chirpy and low frequency-slow sounds.

Younger chinchillas especially like to make this noise to let you know they are there.

They produce this sound in aggressive sequences of slow grunts. It is characterized by contact behavior.

The sound means that chinchillas are very playful, comfortable or very curious. Chinchillas will acquire their sound from birth. Contact call and positional vocal sound exist together.

These pets can make very low sounds with a lower frequency of up to -600Hz. This vocal frequency is very far from the usual range of +600HZ.

Chinchillas make loud bark calls to warn others of danger. The sound is produced through a harsh and high-intensity sound.

They begin with high intensity, then a small and low tapering off. When they bark they usually make up to 5 rhythmic vocal sounds.

The first one is the most aggressive. The intensity of the sound reduces drastically, then a quiet interval sets in.

They make this noise continuously up to 5 times. They do this to defend themselves and warn/communicate with the rest of the group to avoid danger.

Chinchillas make alarm call to indicate that they are in fear or pain. The call sounds like an ear-piercing squeal or a shriek.

They maintain the alarm calls throughout the series. Chinchillas can make up to 20 alarm calls in one session.

This alarm call can also indicate that your chinchilla is excited or agitated.

The sound is characterized by a series of short vocal tone. Chinchillas make this sound to warn other chinchillas.

The wild chinchilla will make this lookout sound to warn others of lurking predator or any impending danger.

Once other chinchillas have heard this alarm call, they may start to hide to escape of predators or danger.

It is essential to know the meaning of the vocalization and behavior of your chinchilla.

Don’t be too concerned if your chinchilla is quiet, this may be an indication that your pet is satisfied and feel comfortable.

However, if they produce unusual sounds you should consult your vet.

The following are some common chinchilla vocalizations:

They make this sound when communicating with each other or to indicate they are happy.

They greet one another by making this sound or when they see one of their own.

You will learn that chinchilla usually use this sound to indicate happiness. When they look at you, they will coo as a sign of joy and time to get outside the cage and play.

Chinchillas produce this sound when they are angry or scared. Chinchillas might make this noise if they do not want you to pick them up.

They start barking vigorously but the sound subsides with time. Chinchilla can persistently bark to sound an alarm.

They usually bark for a long time when you take them to the new environment. The bark will stop after they have adapted that environment.

Since these pets cannot fight back in defense against their enemies, they bark to warn the others to run away from the enemies this is very common for the wild chinchillas.

When Chinchillas are in deep pain, they will cry out. If you hear your chinchilla, don’t hesitate and try to find out what the problem might be.

The cry may be as a result of an alarming situation.

Chinchillas chatter their teeth when in deep pain or feel threatened.

Sometimes chinchillas chatter their teeth when they don’t want to be disturbed or after arguing.

A good example is when a chinchilla is woken up. They may start to chatter sharply.

They may also use this sound for other reasons such as when you’re grooming them to tell you to be more gentle.

It has a vary of different uses so sometimes can be hard to find out what the meaning behind it is.

Why Do Chinchillas Make Weird Noises at Night?

Chinchillas are the most intelligent species among the rodent family.

They make various sound and tonal variation regarding their current state. They make noise when giving birth, breeding, playing or just relaxed and when they are very comfortable.

Their sounds vary depending on their family groups and each individual chinchilla.

These animals are very active at night due to being crepuscular. Expect them to make noises at night. They can sound like squirrels and may bark and chip.

Since these animals have a life span of up to 15 to 20 years, you have enough time to study them and their sounds.

Do Chinchillas Make Noises When Fighting?

Chinchillas can make a variety of noises when they are fighting and are likely to produce noises while fighting over females or food.

Although there may be other reasons why chinchillas are fighting.

If you see your chinchilla fighting with their pair, you should separate them for about three days. After those three days, you can reintroduce each chinchilla to one another.

Why and When do Chinchillas Squeal?

Chinchillas make noise when asleep. They can make high-pitched sounds. Do not worry this is normal for chinchillas and can be an indication that they are very healthy and comfortable.

When the female chinchillas are ready to mate, they make squeal sound to attract the male chinchillas. They usually make the noise at night and during the mating season.

When they want your attention

Chinchillas make squeal sound to get your attention. They do this to lure you into petting them and spending time with them.

What Does it Mean When Baby Chinchillas Make Sounds?

Baby chinchillas make contact sounds when they smell the scent of their mothers. They produce louder and higher pitched sound.

They do this to inform their mothers that they want to be fed or cuddled. In return, the mother may slowly grunts as a sign of love and licks the kits with affection.

They go under their mother’s tummy to get milk.

To clean them the mother will turn the kits upside down and use their tongue to clean them.

Kits show happiness by squealing in high pitches. Young chinchillas are much nosier when compared to the mature ones.

Is It Normal for Chinchillas to Make Noise?

Yes. It is very healthy and normal for these rodents to make noise. As mentioned earlier, every sound chinchillas produce indicates a particular message or mood.

For example, if it does not want to be picked up, it will make a specific sound.

If your chinchilla makes some noises it is perfectly normal and is a sign that they are healthy.

What Does it Mean When Your Chinchilla Make Soft Whining Noises?

Chinchillas make this sound to call the others. In most cases, when one chinchilla is separated from the others, it will produce the soft whining noise to see whether the other chinchillas will respond.

The parents whine to keep in touch with their kits as they move around the cage.  Sometimes, it whines while standing at the door of the cage to attract attention from you.

I have put together a list of some of the best chinchilla cages on the market that are big and spaceious enough for your chinchilla while remaining faily inexpensive.

Do Male Chinchillas Make any Noise?

When male chinchillas want to make romance with the females, they make motor boarding noise in a soft tone as they swish their tail.

When the female chinchillas are around, their male counterparts will make loud screening sounds to arouse them.

Some male chinchillas tend to make a deep sounds when asleep. Sometimes they might make different sounds while sleeping.

The sounds can be gentle hum or soft squeaks. Sometimes Chinchillas can make loud noises that end up waking them up.

Male chinchillas may also bark when you’re about to feed them. They also produce bubbly sounds when playing or very happy.

Are chinchillas sensitive to sound? Chinchillas are very sensitive to noises due to their large ears. Their excellent hearing ability can easily upset them when the sound is too loud.

Why is my chinchilla is making wheezing sounds? It is not normal for a healthy Chinchilla to make a wheezing sound.  This is an indication that it might be having a breathing problem and you are advised to visit your vet.

Do chinchillas purr? They might produce a staccato purring sound on rare instances. However, Chinchilla does produce any noise while scratching. 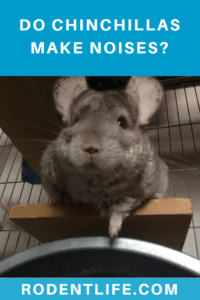 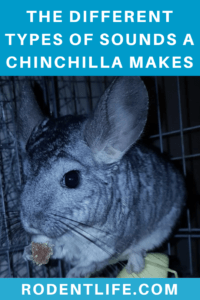 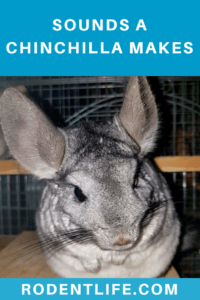