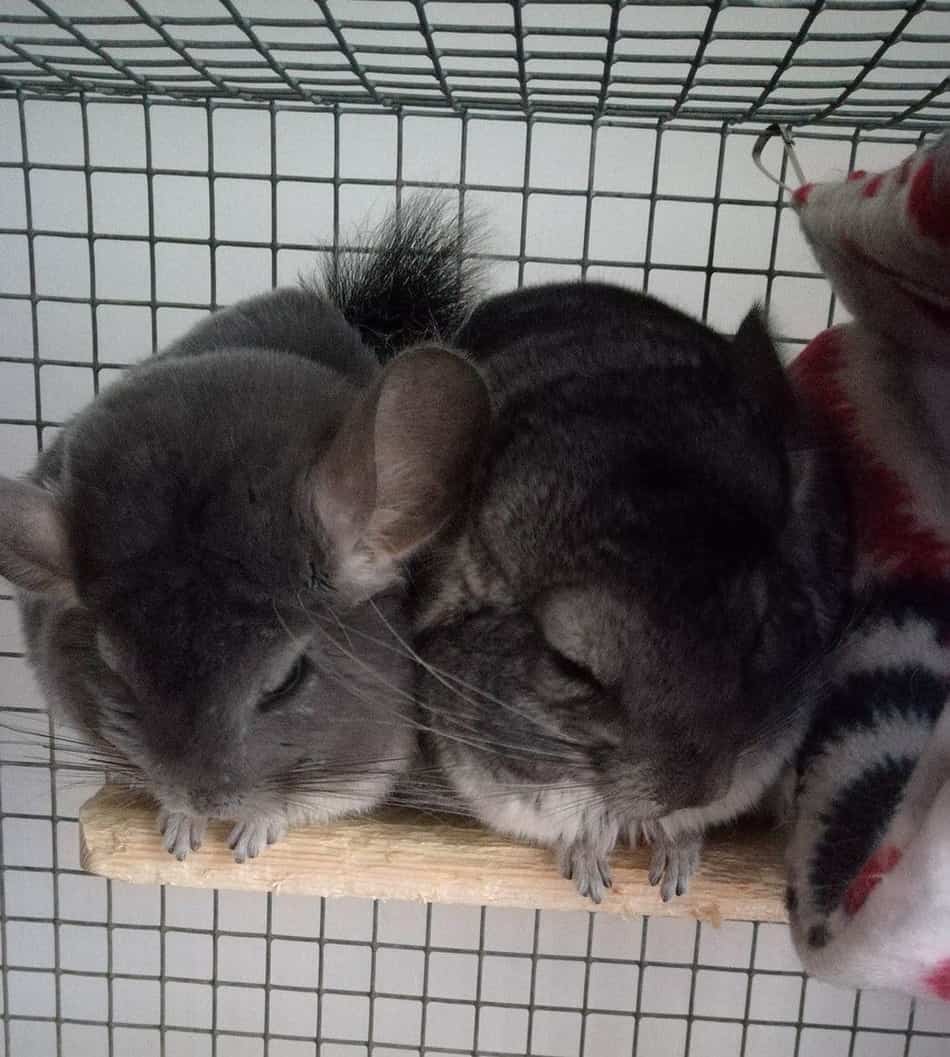 Chinchillas are sophisticated animals, especially when they are in the wild. Their diet is very specific. Giving your chinchilla the correct diet can extend their life length and make them happier and healthier.

Chinchilla’s food requirements include plenty of hay, water, and low amounts of sugar and fats. In this article, you will find out more about the best foods for chinchillas, foods to avoid, effects of bad foods on chinchillas, and the best supplements for chinchillas.

Make sure your chinchilla has plenty of water, hay and a small amount of grass-based pellets.

When it comes to chinchillas, you must always supplement their diet with hay which contains nutrients necessary for chinchilla’s health.

Hay always helps keep chinchilla’s teeth healthy and short. You should provide hay to your chinchillas on a daily basis. Do not forget to remove the old hay and replace with fresh hay.

Hay becomes moldy if left for too long. Most chinchilla owners use Timothy hay for their chinchillas.

Most treats contain high amounts of sugar and fats and it is extremely unhealthy for a chinchilla. Be moderate on the amounts of treats you give your chinchillas.

What is The Dietary Base For Chinchillas?

Chinchillas, just like other pets, require a specific diet.

As mentioned earlier, chinchillas dietary requirements are different from other animals and therefore, they should not eat guinea pig food or gerbil food.

Instead, chinchilla feeds should address the following:

When choosing food for your chinchillas, give them hay and a small amount of pellet mix, otherwise, they will choose what they want to eat. (Often wood or objects around your house).

Chinchillas require one to two tablespoon of hair based pellets per day.

Since chinchillas are active at dawn and dusk, those are the perfect times to feed them.

One tablespoon of pellets in the morning, and another one in the evening. This will ensure your chinchillas are well-fed and remain healthy.

Like any other food, chinchillas foods have a short shelf-life. (Approximately six months).

Once food expires, it loses its nutritional values and can cause health issues to your chinchillas. So make sure it is within date of the expiry date!

Diet-Related Problems To Watch For When Giving Your Chinchilla Food

The teeth of chinchillas grow throughout their lives, and when they do not consume enough hay, the upper and lower part of their teeth starts to collide while each other and can cause a serious health problem especially when they need to chew.

This causes serious pain on the teeth as they chew. Plus they can start to drool and start to produce discharge out of their eyes because of the upper teeth exerting pressure.

When this happens, there is really nothing you can do other than giving your chinchillas softwoods and pain relievers. If you take your chinchilla to the vets they’ll be able to carry out a procedure where they can shorten their teeth.

In addition, overfeeding your chinchillas with pellets may cause diarrhea and obesity because of too much carbohydrate ingestion.

Also, too much fresh greens can cause diarrhea or soft stool. While you should provide your chinchillas with lots of hay, feeding them alfalfa hay has been linked to the calcium-based bladder stones.

Rather, give your chinchillas Timothy hay and other low-calcium hay such as meadow grass and orchard.

Since chinchillas do not vomit, hard or soft foods like seeds, nuts, dried fruits or raisings can easily get stuck in the esophagus or mouth cause gagging, salivation, poor appetite, and breathing difficulties. Nuts and seeds should be avoided as they are very high in fats and can make your chinchilla ill!

Furthermore, indigestible beddings like wood shaving cause health problems. If you notice your chinchillas exhibiting these signs, take them to the vet to have the lodged content removed.

What Are Some of the Foods To Avoid When Feeding Chinchillas?

Pellets do not provide enough fiber to help the chinchilla wear down their teeth which grow continuously. Treats such as seeds, nuts, grains, dried fruits cannot be digested easy and may cause tooth damage. Nuts and seeds should be avoided as they are very high in fats and can make your chinchilla ill!

Hard objects such as trees and fruits like peach trees, pear, and apples are good for your chinchilla as they promote teeth wear and chewing. However, toxic trees redwood, plum, cedar, cherry must be avoided.

Keep in mind your chinchillas depend on you to make wise choices about their diet. Take note of what you have learned here and used it to your next purchase to ensure they live a long life.

How Do You Know The Quality of Your Chinchilla Hay?

According to experts, the biggest part of a chinchilla diet must be high-quality Timothy Hay.

Quality hay is dust-free, fresh, and smells sweet. Do not feed your chinchilla moldy or damp hay because it can cause stomach upsets.

Make sure your chinchillas always get a fresh supply of Timothy hay. Ideally, you should provide the hay in a rack to keep it fresh and to deter your chinchillas from consuming hay that has been urinated on.

Alfalfa is a good choice for chinchillas because it contains high amounts of nutrients. It is ideal for growing and younger chinchillas or those that are malnutritioned.  You can provide your chinchillas with this hay occasionally and to adults as treats. However, it shouldn’t be their primary food.

Orchard grass is bright green and smells fresh. It is also high in fibers. Sometimes it contains alfalfa, garrison, and Timothy. It is the best alternative to Timothy Hay.

Oat hay is tough with hard stems. It is pale/ yellow in color. It has oat heads and should be fed occasionally. Bluegrass hay is another great option.

Botanical hay is also good it is Timothy hay, but mixed up with herbs.

What Other Foods Can You Give Chinchillas Other Than Hay?

Even though hay should be most of the chinchilla diet, you should provide your chinchilla with a small amount of dry food.

It is also imperative to note chinchillas can be fussy eaters. So, what might look appealing to you, might not appeal to them. In short, chinchillas love to pick their favorite foods and disregarding others. This can result in mineral deficiencies.

Pellets are a great way to add nutrition to chinchillas as they contain a balanced diet. These pellets are made from alfalfa hay with different kinds of minerals and vitamins.

Your chinchilla should have regular access to dried pellets and hay.

The teeth of chinchillas grow throughout their lives.

In one year, the teeth can grow a couple of inches in length. Like other mammals, chinchillas also wear their teeth down.

Without wearing down their teeth, they can easily overgrow, resulting in starvation and severe pain.

Luckily, there is a host of safe chinchilla chews in pet stores: this includes fruitwood, cuttlefish, and pumice.

Chinchillas also love parts of pear tree or apple, where your furry friends will strip off the entire bark.

Dangers of Feeding Dry Foods to Your Chinchillas

You should be extremely careful to what you feed your chinchilla, as it could affect their health and overall well being.

You should never feed your pet chinchillas crackers, wheat, weetbix, rolled oats or cereals because it affects their phosphorus and calcium ratio, which diminishes absorption of nutrients of hay, reducing calcium levels in their bodies and causing bone, dental, and digestive complications.

Chinchillas must have a diet that is rich in fibre and low in calories, especially carbohydrates and fats.

For some time, pellet diets have been sold as a staple for chinchilla diet. However, pellets were initially made for non-household pets.

Some of the issues associated with feeding chinchillas too much pellets are:

Vets recommend timothy hay as the staple food for chinchillas.

Timothy hay helps wear down the animal’s teeth and cleans them at the same time.

You should also provide chew sticks to your chinchillas. Also, supplement the main diet with fresh veggies, fresh water, and grass-based pellets.

No two hay types have the same nutrient content and structure. This is true for alfalfa hay and timothy hay.

Although both foods are sold for small pets, each has its own ingredients and can serve different purposes in your chinchilla’s dietary needs, and you should not substitute them with each other.

Alfalfa can be provided during pregnancy or during the development stages of a chinchilla. Once chinchillas reach about seven months, you should switch their diet to strictly Timothy hay diet, unless instructed otherwise by your vet.

Can I Feed My Chinchillas Only Dry Food mixture?

No, you should always feed your pet chinchilla a mixture of mostly timothy hay and a small amount of dry grass pellets.

According to the University of Edinburgh, feeding chinchillas only dry-food mixture can cause anomalies such as digestive issues and painful teeth problems that require medical treatment.

Consuming less hay can result in abnormal growth of the teeth, which can cause painful dental diseases. Sometimes, the roots may penetrate the eye sockets and cause discharge.

Inflammation of the skin is also another problem caused by dry food mixture.

Can chinchillas eat gerbil food? No, they cannot. Chinchillas have a special diet that is different from other animals, and hence they should not consume gerbil food. They need chinchilla food that follows strict guidelines.

Can you eat a pet chinchilla? Chinchillas are usually regarded as pets. Additionally, they are an endangered species that need to take care of. Chinchillas are herbivores, they feed on leaves, grasses, and twigs. 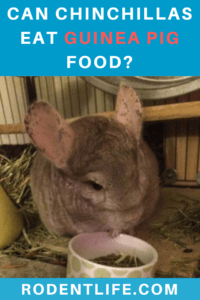 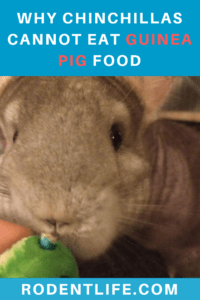