Chinchillas are great pets that can last for 15 – 20 years. They can learn their name through repetition and have a great memory, but how smart are they?

Are chinchillas smart? Chinchillas have a great memory and can learn through patience and repetition which suggests a high intelligence.

Chinchillas are quick learners and adapt quickly to routines.

How Smart are Chinchillas?

Chinchillas learn through repetition. If you repeat a task over and over, eventually the chinchilla will begin to learn how to do it.

It’s hard to measure an animals intelligence. Some chinchilla pet owners say it varies depending on each individual chinchilla.

Nobody truly knows how smart chinchillas are.

They do a few things that suggest they have high intelligence:

They Have a Great Memory

Chinchillas have an excellent memory and can recognize your voice and your appearance.

They’ll remember where their water and food bowl is and can quickly learn the positioning and layout of their cage which allows them to navigate around the cage very quickly.

They Can Calculate Jumps Perfectly

Chinchillas are agile and fast. They are able to calculate the distance between each jump perfectly.

It is very rare for a chinchilla to miss a step.

They Can Navigate Their Cage With Ease

They can remember the placement and the layout of their cage, which allows them to jump and run around extremely fast without bumping into anything.

They Urinate In The Same Area of Their Cage

Chinchillas will urinate in the same area of the cage so that they don’t get their cage dirty.

Here are some more intelligent behaviors traits of a chinchilla:

Chinchillas memorize where things are placed around the room and its cage.

Once it knows the layout of the cage, it will be able to zip around with extreme efficiency.

It will also learn where its food is stored.

If you keep treats under the cabinet across the room from its cage, every time you walk by the cabinet, it will know you are getting a treat.

Because chinchillas are creatures of habit, you must keep them on a set routine.

Chinchillas are also able to learn basic tricks. Below is a video that demonstrates the type of tricks you can treat chinchillas.

Can Chinchillas Learn Their Names?

Chinchillas can learn their name through repetition.

Over time, your chinchilla will get used to you calling it a certain name by recognizing the tone and pitch you use.

Can Chinchillas be Litter Trained?

Litter-box training is difficult for chinchillas, and will rarely be successful.

If you move the box, the chinchilla will continue to urinate in its habitual urination spot. Using a litter box makes cleaning easier.

Every chinchilla is different. Some will learn things that others won’t.

The important thing to remember is that training a chinchilla takes time.

What Can Chinchillas Learn?

Chinchillas can easily learn their names and will respond by waking up and/or coming when they are called.

Some chinchillas are capable of being litter box trained for urinating. Chinchillas often urinate in the same spot in a cage.

Some chinchillas will adopt the litter box after repeated reinforcement with treats while others may just go urinate somewhere else.

Some chinchillas can be taught several tricks, such as reclining on their backs, looping through boxes, etc. These are all learned responses that are often reinforced with treats.

Often owners want to train their chinchilla to sit on their laps for long periods. This type of training isn’t likely to work well with a chinchilla.

Chinchillas are both extremely curious and also have the unfortunate role of being prey in the wild. Even though they have been domesticated, these traits are still very strongly ingrained.

Chinchillas can learn come and other commands.

Chinchillas Can Recognise When Something is Wrong

Chinchilla’s form strong bonds with their cage mates. If one chinchilla dies, you will see major changes in the remaining chinchillas.

What you need to do is to take care of the surviving chinchilla.

Are chinchillas smarter than hamsters? Chinchillas are able to learn and recognize commands unlike hamsters and are thought to be smarter.

Are chinchillas smarter than rabbits? Chinchillas are able to learn more tricks and be trained more obedient than rabbits and are thought to be smarter. 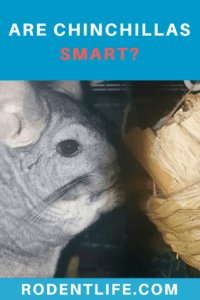 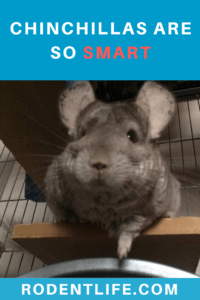 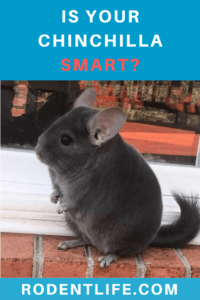 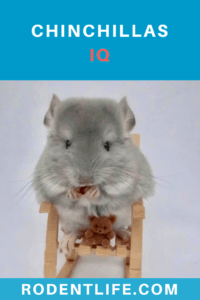