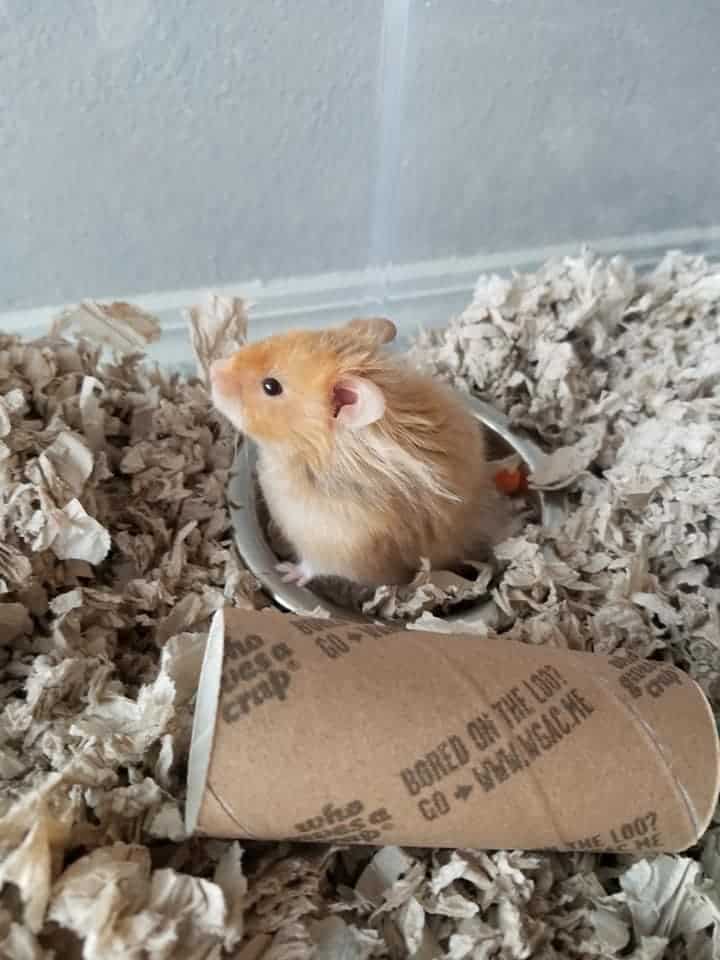 Syrian hamsters are one of the most common small pets in the world, commonly kept in households for children and adults to enjoy. They are omnivorous critters and eat everything from fresh foods to seeds to pellets that are formulated for them.

Syrian hamsters are great pets to keep. They don’t tend to like other hamsters, so they usually have to be kept to themselves or you might have fighting on your hands.

They have lost much of their habitat to encroachment from humans and habitat destruction.

This has resulted in Syrian hamsters getting a designation as Vulnerable by the International Union for Conservation of Nature, which designates animals from endangered to least concern.

The Syrian hamster was thought to be extinct in the wild, but several were caught in recent years.

Fact 2: The Syrian hamster is also known as the golden hamster. 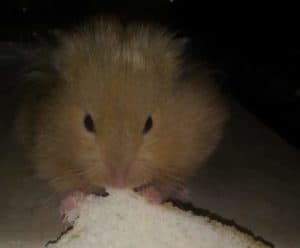 This is due to the golden coloring that these hamsters were found to have.

The scientific name of the golden or Syrian hamster is Mesocrecitus auratus. They were named in 1839 by George Robert Waterhouse, although his original name for them was Cricetus auratus.

Fact 3: Syrian hamsters have a name in the local Arabic dialect that loosely translates to “mister saddlebags”.

This is due to the large cheek pouches that the Syrian hamster has.

These large cheek pouches extend from the mouth to the neck, reaching back almost to the shoulders. When stuffed with food, they can look like the hamster has a tumor or abscess.

Some hamsters do actually get infections in their cheek pouches because they stuff them with too much food or they store hard or sharp materials that they can’t get back out easily.

Hamsters use their cheek pouches to store foods when they are out foraging in the wild. They then bring the food back to their burrows, where they consume it later.

Domesticated hamsters also pack their cheek pouches, even though they don’t have far to travel in their cages.

They get to be between 5 and 7 inches long, generally fitting in a person’s hand, which makes them a great size for pets.

The lifespan of these little guys is roughly 2 to 3 years, but the longest Syrian hamster on record lived to the ripe old age of 6 and a half years old. They tend to live longer in homes than in the wild, according to most resources.

Females, once they become sexually mature, can come into season every 4 days, including the day she delivers her pups. They can delay their gestation period in times of stress up to 21 days but that can have complications that arise with it.

Syrian hamsters can have very large litters with up to 20 pups. It is more common to have 8 to 10 pups.

Because of the short gestation period and a female able to get pregnant the day she delivers her young, it is possible for her to have to care for multiple litters at the same time.

Fact 6: In 1930, a zoologist in Israel captured a litter of Syrian hamster pups and their mother in Aleppo. They were used in breeding programs for laboratory animals.

Apparently, there was a hole in one of the cages, and several of these Syrian hamsters escaped. There are now hamsters that live wild in Israel, and they are thought to be direct descendents of these escape artists.

Fact 7: The hamsters that were caught in Aleppo are considered the foundation stock for all of the domesticated golden hamsters in North America.

Mitochondrial DNA studies have been done on today’s hamsters, and all of them share a female ancestor. This can be determined because mitochondrial DNA is passed down from the mother.

Fact 8: Golden or Syrian hamsters are incredibly territorial, more so than some other hamsters that can tolerate or even like living together, like Robos.

Exceptions to this are rare, with even females sometimes attacking males directly after mating. Males and females will fight if the female is not in season, as well.

Siblings are also known to attack each other. They are typically separated from their mother by about 4 weeks.

Same-sex siblings can sometimes live together up until they are around 8 weeks old. By this point, they start to become territorial and may attack each other.

Fact 9: When stressed, females may eat their young, allowing resources to be conserved for the remaining pups in their litter.

Females may also kill their young after humans interact with them, as the foreign scent being detected is thought to be a threat.

Fact 10: Burrows are marked by golden hamsters to note that it is their territory. They have scent glands along their hips that they use to mark the sides of the burrows.

Males may lick the area around their scent glands, which creates a damp spot in the fur, before rubbing alongside the sides or areas they want to mark. Females may use secretions as well as feces to mark their territory and burrows.

Research expeditions in 1997 and 1999 mapped 30 burrows and each of these only contained one adult in the wilds of Syria and Turkey.

Fact 11: Laboratory populations tend to be nocturnal, but wild populations that were caught and studied in the 1997 and 1999 expeditions support that Syrian hamsters are crepuscular. This means that they are active at dawn and dusk rather than during the day or at night.

It is unknown why they are so active at this time of day. Several theories have been presented, such as avoiding the owls that prey on them; this may not be the case as owls will also hunt at dawn and dusk.

The Syrian hamsters may also be active at this time to avoid the major temperature fluctuations in the desert during the day and night. Daytime tends to be much hotter, while nights are cool; they avoid this by being in their burrows at those times.

Fact 12: Extensive studies have been done on golden hamsters because of their use as laboratory animals. They can run between two and five miles each day.

They also store extensive amounts of food, with some estimates being a ton of food stored during one hamster’s lifetime. The food is kept in a different area of their cage or burrow than they nest in or urinate in.

There is an exception to keeping the food separated at that is with older hamsters who have trouble eating hard foods. They may soak their food in urine to soften it.

Hamsters are also fastidious in their housekeeping. They will sort through their hoarded food to clean, getting rid of food that has gone bad such as by molding or rotting.

Fact 13: Syrian hamsters have been documented packing their cheek pouches so full that they cannot actually even close their mouths.

They then bring the food back to their burrow or area of their cage and empty the cheek pouches with their paws – pushing it out from back to front.

Fact 14: Syrian hamsters are commonly used in laboratory protocols. Between 2006 and 2007, roughly 19 percent of the laboratory animals in the United States were golden hamsters.

These hamsters are used in a variety of research programs, including cancer studies and respiratory studies. They also are used as models for metabolic disorders and general health issues.

Fact 15: Long haired Syrian or golden hamsters are often called teddy bear hamsters. They have all of the same features as their short-haired relatives except for the hair length.

Long haired male hamsters tend to have longer hair than females, with a “skirt” of long hair around their backside. Females, in comparison, have a much shorter coat, although it is longer than a short haired hamster.

Fact 16: Syrian hamsters have adapted to metabolize alcohols, with a much larger liver than other hamster species. This happens because the hamsters living in arid environments store fruit during the summer that ferments by the time they get to it during the winter months.

This trait has led to Syrian hamsters being commonly used in studies on alcohol because their large liver allows them to metabolize alcohol quickly.

Fact 18: Golden hamsters are the most common type of hamster found in pet stores. They originally came in golden or brown colors but have since developed color coat mutations.

They can be found in a variety of colors now, including white, gray, banded, and tortoiseshell.

Fact 19: Syrian hamsters were first introduced to North America in 1936. These were some of the original domesticated hamsters.

Fact 20: Syrian hamsters are often kept as pets because they tend to be very tame and docile. They also tend to be slow movers, which can make them easier to handle for children.

Because of their tendency towards activity in the evenings, they are also considered good pets because they need little care during the day, instead spending that time sleeping and becoming active in their cages around the time that people come home from work and school.

Fact 21: Syrian hamsters are easy to keep entertained in their cages.

They need a large hamster wheel, approximately 9 to 10 inches in diameter when they are fully grown because they need to be able to run on it without curving their spine. Otherwise they may develop back and spinal issues, especially as they age.

You can often provide enrichment relatively expensively. Cardboard tubes such as paper towel holders can be used, as well as empty cereal boxes.

You do want to give your hamster plenty to chew on, as their teeth are constantly growing. If you notice your Syrian hamster chewing on the bars of his or her cage, its teeth might hurt or it could be bored and in need of more stimulation.

Fact 22: Syrian hamsters need a larger cage than dwarf hamsters given that they are much larger than their dwarf cousins. A small cage can make your Syrian hamster chronically stressed.

A good rule of thumb for your Syrian hamster’s cage is to have at least 10,000 square centimeters of floor space. It should also be high enough that they can rear up on their back legs and have several inches – ideally at least six – above their head; this is where a multilevel cage can be very beneficial if it is easy for your Syrian hamster to get up and down the levels.

Fact 23: In addition to long haired and short haired Syrians, breeders have developed other types of Syrian hamsters.

One type is a Satin Syrian hamster, which has a glossy sheen to his or her coat, which is caused by some of the fur shafts being hollowed out. You should not breed two Satin Syrian hamsters together as the resulting offspring often has greasy, thin fur.

Another type of Syrian hamster is the Rex Syrian hamster, which is starting to become common in North America. These hamsters have a curly or crimped, waxy coat, which tends to be short and dense.

Fact 25: The dominant spot coat color is a white hamster with colored spots.

This was first discovered in 1964 in the United States and has become popular because these hamsters tend to be easy to breed.

Are Syrian hamsters friendly? Syrian hamsters are relatively friendly but they don’t like to be paired with other hamsters so it is best to keep them by themselves. They can make wonderful pets for slightly older children as they don’t tend to bite unless threatened. 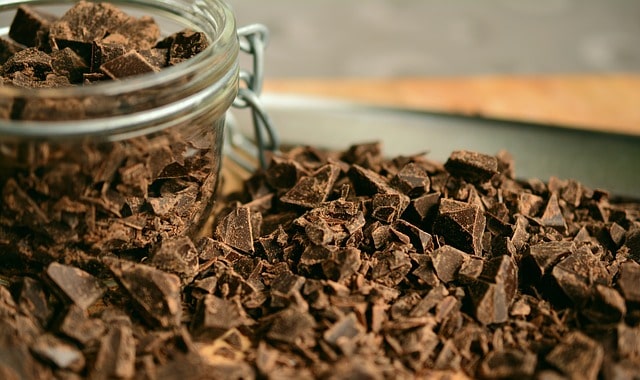 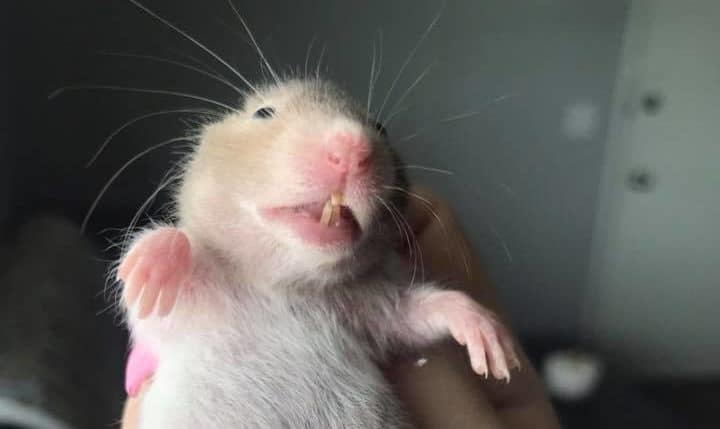 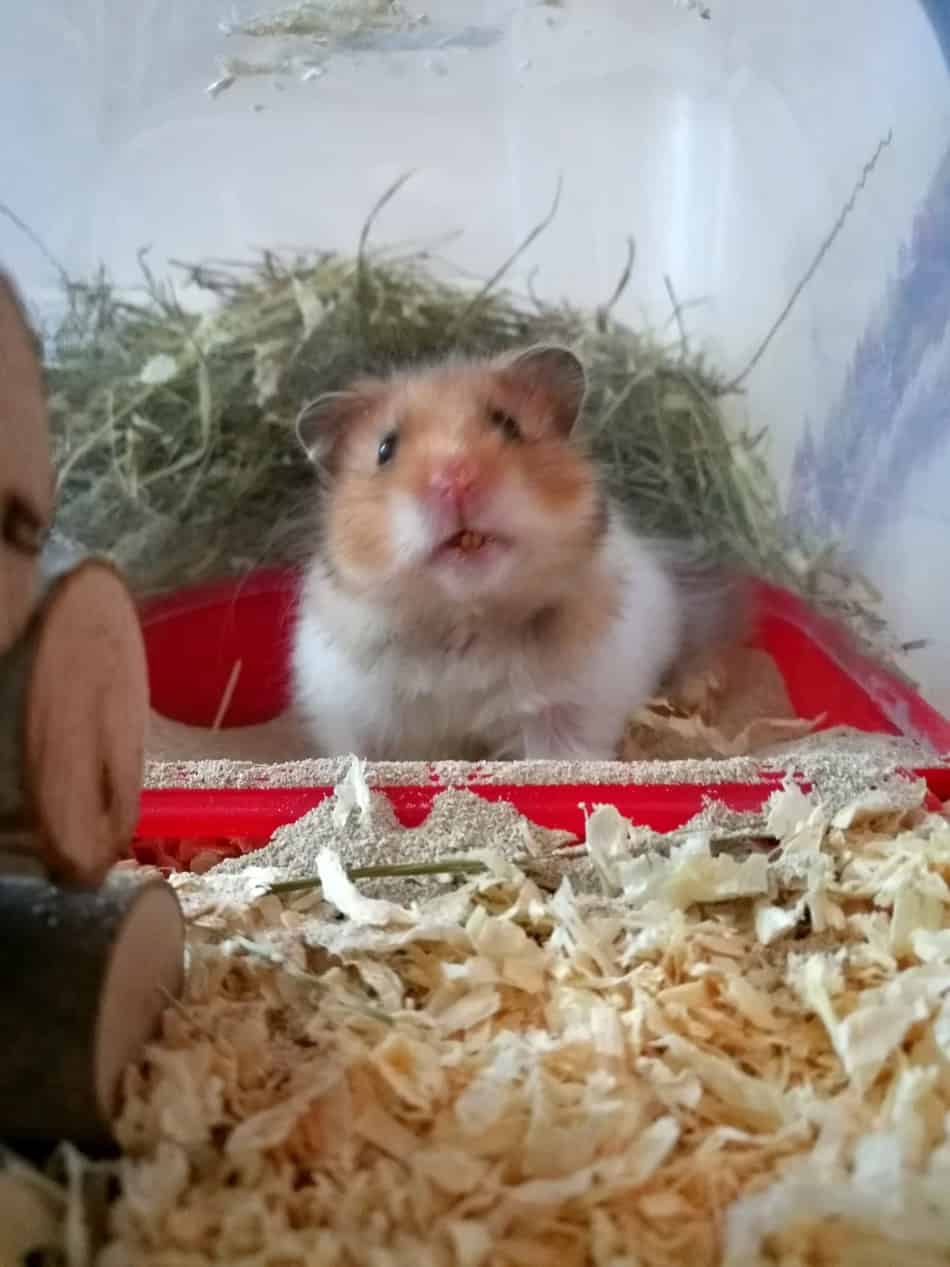 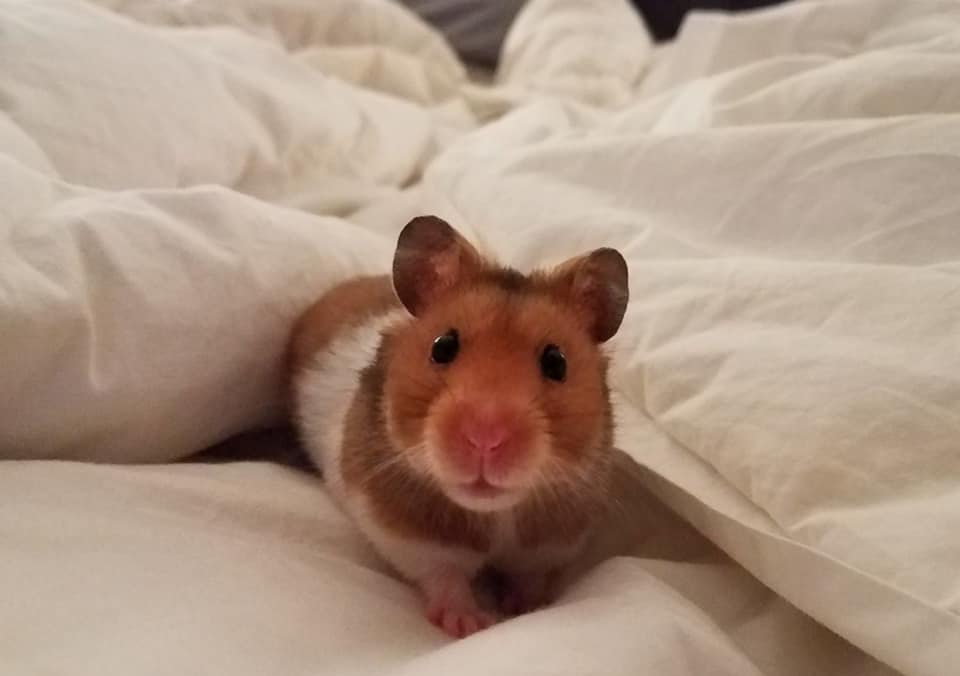